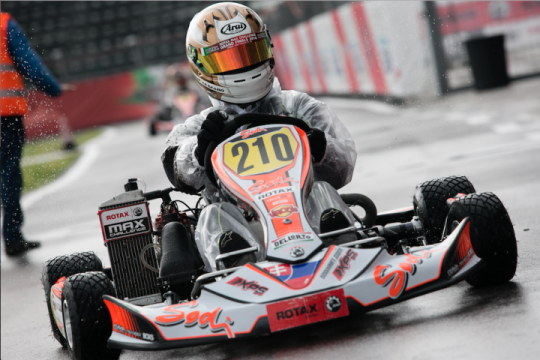 Author: Vroomkart International
An heavy rain fall stopped the prefinal A of the DD2 class, now drivers are waiting for second round of prefinal races.
Junior MAX - Prefinal A

A contact shuffles positions immediately after the green flag, with polesitter Perdana Minang losing the head of the race. Finn Roope Ropanen exploits the situation, taking the lead and opening a considerable gap on Zsombor Kovacs and Marco Settimo. On lap three an heavy rain fall hits the Circuito Internazionale di Napoli, helping Mathias Lund and Leroy Jagesar on wet tyres. The two drivers started from the back of the grid, betting on rain and now they will start the final race from the first row. Anze Dovjak from Czech Republic rounds out the podium places.

Denis Mavlanov takes home what it seemed to be an easy win: the Russian driver leads over German Christopher Dreyspring from flag to flag. The leading duo opens a considerable gap on Brazilian Joao Rosate and Belgian Felix Warge. After a few laps, the latter gets the better of South American driver, earning the third position.

Polesitter Fernando Guzzi goes wide on the first corner, losing the head of the race. Flying Finn Anti Ollikainen thanks and takes the lead of the race over Polish Robert Pesevski, who led the race for a while, and American Luis Schiavo. An amazing performance by Thomas Schumacher shakes the final classification: German driver is able to gain positions lap by lap, finishing the race with behind Ollikainen in second position.

Ferenc Kancsar, former Grand Finals winner and polesitter, takes home a clean flag-to-flag win. Second position for Andreas Backman who gets the better of Kacper Bielecki  and Constantin Schoell: these two drivers have been trading position in the final phases of the race, and in the end Austrian driver gets the better. Italian Cosimo Durante finishes only in eighth position, but the most unlucky driver is Luca Munaretto who spins on the first lap due to a contact with Spaniard Oriol Dalmau when he was in the leading positions.

On lap 10 the race is stopped due to heavy rain.