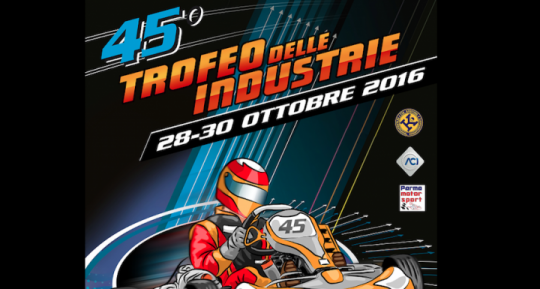 Press Release by: FM Press
The 45th edition of the Trofeo delle Industrie is scheduled for next 28-30 October at the South Garda Karting circuit of Lonato. Categories KZ2, 60 Mini, OK Junior, Prodriver Under and Prodriver Over on track. A total of 180 drivers already entered.
Edition 2016 of the Trofeo delle Industrie – race scheduled for the end of October and organized by Parma Karting, will have a lot of drivers on track at South Garda Karting of Lonato in categories KZ2, OK Junior, 60 Mini, Prodriver Under and Over.

The entry cap has already been reached in KZ2, but also 60 Mini is at its full capacity, and OK Junior is getting there too. Good presence also in the two Prodriver categories Under and Over.

The 45th edition of the Trofeo delle Industrie announces to be a good success with the presence of several works teams and top class squads, among which Ward Racing is standing out with the highest number of drivers fielded: 18. A lot of different countries will be represented in this event, with drivers coming from the whole Europe but also from Australia, Brazil, China, Indonesia, Singapore and South Africa. Besides Italy, the most represented country is Russia with 22 drivers joining this event.

The spectacle is granted both in terms of quantity (180 drivers already entered the race) and quality of drivers. The new European Champion Fabian Federer will be at the start of KZ2 on CRG-Modena run by team SRP Racing, the veteran Alessandro Piccini, on Tony Kart-Vortex, will be at his comeback among the historic protagonists of the Trofeo delle Industrie after winning the trophy three times in a row back in 1992, 1993 and 1994. The strong pairing of Maranello Kart made by Tommaso Mosca and Massimo Dante will be among the title contenders too, as CKR’s trio made by Enrico Bernardotto, Alessandro Pelizzari and Lorenzo Giannoni. The very fast Giacomo Pollini on CRG-Maxter, former European Champion Andrea Dalè on CRG-Tm, Alessandro Giulietti on TB Kart-Tm and Mirko Torsellini, at his comeback with CRG also to prepare season 2017, will also give their best to secure the victory. Cristopher Zani on DR and the Spanish driver Gerard Cebrian Ariza on CRG will also have good chances to aim at the big target. Italian 2015 Champion Riccardo Longhi will make it to the start with Emilia Kart on BirelArt-Tm.

OK Junior’s entry list is also very interesting and comprises the new Italian Champion Marzio Moretti on Tony Kart-Vortex run by Baby Race and his team mate from Russia Bogdan Fetisov. Morsicani Racing will play its chances with the pairing made by Leonardo Bizzotto and the Indonesian Moar Maest Urbeltz on CRG-Tm, as will do CRG with its youngsters led by 60 Mini 2015 Italian Champion Mattia Michelotto and the nephew of former F1 driver  Alessandro Nannini Matteo Nannini. Among the most competitive young drivers, the Russian Ivan Shvetsov of Ward Racing, the British Teddy Wilson of Energy, the German Marius Zug of RL Competition and Alessandro Giardelli of Lario Motorsport.

Category 60 Mini also features good figures. A lot of young drivers have shown great things so far in this season, as the Dutch girl Maya Wueg, who recently won the WSK Final Cup, Leonardo Caglioni, who was second in the Italian 2016 Championship and then Gamoto Racing’s Alfio Spina and the Spanish Jose’ Gomez. The Chinese Cenyu Han showed a great growth as did Pietro Delli Guanti of Birel Art, Federico Cecchi of Revolution Motorsport, the Russian Nikita Bedrin who came to the fore in WSK alongside the strong interpreter of the Italian Championship Luca Bosco of Baby Race.

Among the drivers entered in Prodriver Under, Luca Bombardelli has recently won the Autumn Trophy of Lonato on Maranello, while 2015 Italian Champion Andrea Tonoli will partake in Prodriver Over on CRG.

The rich prize ceremony will close the event. The Absolute Trophy Comm. Carlo Fabi will also be awarded to 60 Mini, OK Junior and KZ2.