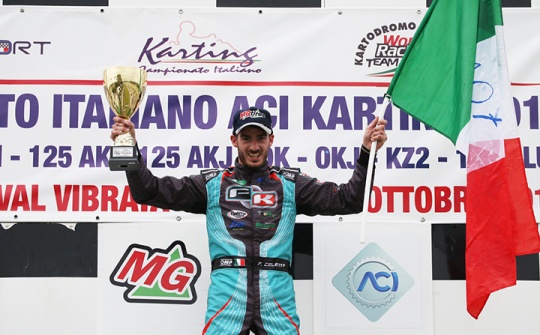 It has been a great weekend in Sant’Egidio alla Vibrata, lived very intensively by all the 100 drivers involved in the closing round after the four rounds held in Castelletto, Sarno, Adria and Triscina for the Italian ACI Karting 2016 Championship.

KZ2. In KZ2, Francesco Celenta on Formula K-Tm already secured the title at the beginning of the weekend thanks to the advantage he accumulated in the initial rounds due to the absence of his main rival Mirko Torsellini. Despite having the title on his hands, Celenta honored the title won until the end. In Race-1 he was first at the flag, but then was handed a penalty as he overtook a rival under yellow flags and was relegated to the final P12. The victory was therefore inherited by a strong Sauro Cesetti (Intrepid-Tm), who led Marco Pastacaldi (Maranello-Tm) and Valerio Rossi (Croc-Tm). Celenta unleashed his speed in Race-2 climbing back to the lead and taking a good victory leadign Cesetti, who was again on the podium, and Riccardo Loddo (CRG-Tm), who started from the pole position due to the top eight grid inversion.

60 MINI. In 60 Mini Gabriele Minì (Energy-Iame) has run an excellent race, settling for a placing in Race-1 (P5), result that allowed him to take the Italian title. The American Ugo Ugochukwu won the first Final on Energy-Iame leading the other title contender Alfio Spina (CRG-Tm), while Luca Bosco was third on Tony Kart-Tm, and Leonardo Caglioni (Evokart-Tm) rounded off the top four. Minì started a good duel in Race-2 crossing the finish line first, proceeding Ugochukwu and Bosco.

OK JUNIOR. Marzio Moretti claimed the Championship victory on Tony Kart-Vortex thanks to the win in Race-1, as he led his main rival for the title Nicolò Genisi (Formula K-Tm) at the flag. The third step of Race-1’s podium went to Alessandro Rosso (BirelArt-Tm), who proceeded Giuseppe Fusco on Lenzokart-Lke. Fusco and Genisi were involved in an incident in Race-2 opening the way to Edoardo Morricone’s victory (Tony Kart-Vortex). Rosso was again on the podium in P2, while Genisi was third at the end of a great comeback race.

ACI KART AND ACI KART JUNIOR. The two categories powered by Iame have been very tight. Matteo Zamporlini secured the victory in the first race, after a battle involving also Alessandro Di Cori, both on Tony Kart. Di Cori managed to win the second Final, but a 10s time penalty relegated him to P3 as he was proceeded by a surprisingMaria Chiara Liuzzi (Formula K) and Zamporlini. The Championship victory (sub-judice due to a proceeding appeal) went to Di Cori.

The Polish driver Aleksander Bardas (DR) won Final one of ACI Kart Junior, getting closer to the championship victory. The podium was completed by Luca Graziani (FA Kart) and Benjamin Cartery (Formula K). The second Final was won by Graziani, while the second place went to Mathias Torreggiani (CRG). Bardas got another podium in P3, result that handed him the championship victory.

125 CLUB. The first final of the closing round of 125 Club was won by Tommaso Polidoro (EKS-TK-Tm), who managed to pull away in the classification thanks to this result. The podium was rounded off by his team mate Lino Di Simplicio, while his title rival Francesco Atzori (CRG-Tm) had to settle for P3. Polidoro could not score another podium in the heat of the second Final, due to a contact with a rival in the closing stages. The second Final was won by Manuele Grossi (Tony Kart-Tm) as Pierino Vimini (CRG-Tm) was second and Di Simplicio third. Polidoro ended fourth and secured the Italian title in this way.

All classifications and results are available at www.acisportitalia.it