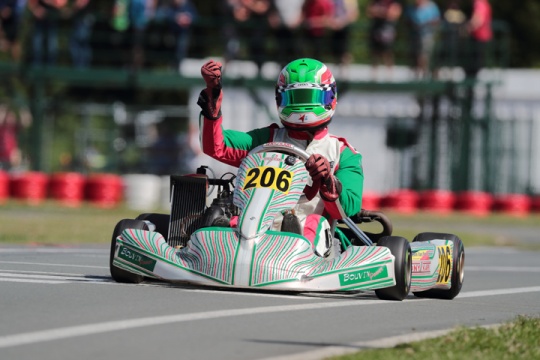 Author: Vroomkart International
From zero to RMGF in just three years: Glenn Van Parijs is the man to beat in the BNL Karting Series since last year. Second RMCGF for him, with an eye on racing car for the next year.
First of all, let's recap your career: highlights and difficulties that led you to be the driver that you’re today.

I only started karting at the age of 15. I had two difficult learning years in seniors, but the third year we already secured a Belgian Max Challenge championship and became Vice-Champion in the BNL Karting series. This meant my first ticket to the Grand Finals, in New Orleans that year. The years after we were consistently getting top 10 results in the Euromax Challenge. This year we managed to secure the BNL karting series championship, the one we nearly missed (vice-champion) three years ago. Finalizing my karting career by becoming champion in a European-leveled championship like the BNL Series is definitely one of the highlights in my career.


A winning season in the BNL Karting Series, your home-country series. Tell us how did it go...

Two out of the three race-weekends in the BNL Series are hosted at Genk, Belgium. This is where I did my first laps in a kart, so off course it’s an amazing feeling to become champion at our ‘own’ track only a few years later. My best scoring race from this years’ BNL series however was in Ostricourt, France at the second race-weekend of the series. We achieved a clean sheet race-weekend, giving us a very strong foundation for the championship. At the third and final race in Genk we managed to secure the title.

How are you getting ready for this event?

At the Grand Finals, the drivers are being equipped with karts and engines directly from the organization. In my case, seniors, this means a Sodi-Kart. Our local Sodi-Kart distributor supplied us with this same chassis, so I was already able to do quite some laps and also a race, giving me the opportunity to adapt to the chassis. This race I did at Genk resulted in a Pole position and an overall podium finish, giving me a confident feeling to go racing at Sarno. Off course one should always keep in mind that in some way, these Grand Finals are a bit of lottery. The material equipped by the organizations might have small differences, so having a good engine for example might positively influence the result. So, fingers crossed!

In your opinion who are the most tough rivals you will meet in Sarno?

In my opinion, everyone competing in Sarno has equally earned it by winning his or her ticket during the year.

What do you expect from this experience?

Just like in the previous Grand Finals I attended, I will try and enjoy every minute of this amazing race. Looking at the track, on which I haven’t driven yet, I expect to see and drive exciting races.

Which are your plans for the next season?

Next year I’ll try to hop in and out of the kart regularly and pick up some races throughout the season, if my studies allow it to. Racing a car hopefully will be on this year’s schedule too !