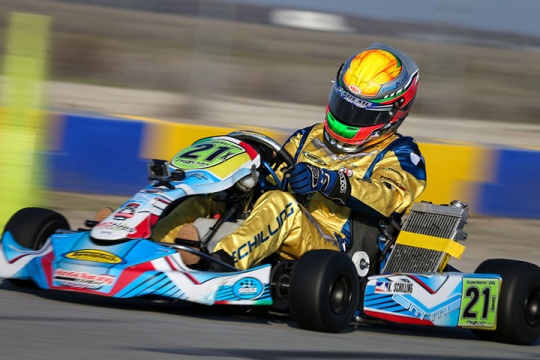 Press Release by: ProMedia Motorsport
11 title winners to receive championship prizes during year-end banquet on October 22 in Lancaster
The 2016 California ProKart Challenge completed its program during the last weekend of September, celebrating a record season. Entry numbers increased throughout the season at the six events, beginning with nearly 200 drivers at the opening in February. The championship chases in all 11 categories were hotly contested, with the best five of six rounds counted toward the final standings. All 11 class champions, along with the vice-champion and third-place finisher will be honored and recognized during the year-end ceremony on October 22 in Lancaster, California.

For a third time, Billy Musgrave has secured the 2Wild Karting S1 Pro Stock Moto title. One victory and three runner-up finishes on the year was enough for the 2013-2014 champion to secure this year’s championship. The title was still up for grabs heading into the finale weekend, with Musgrave maintaining the point lead to the final checkered flag. 2015 champion Jarred Campbell was the top challenger throughout the season, ending up second in the standings. Campbell recorded five straight top-five finishes, including a victory at Round Three. Reigning SKUSA Pro Tour S4 champion Jimmy McNeil returned to competing in the S1 division at the California PKC program. McNeil recorded three podium finishes highlighted by a Round Two victory to secure the third spot in the championship standings.

Musgrave came just over 1000 feet from becoming the first driver to earn both the S1 and the Phil Giebler Racing X30 Senior championship in the same season. The title chase was down to just two drivers entering the finale weekend at the Streets of Lancaster Grand Prix - Musgrave and Senior rookie Nicky Hays. Musgrave was in position to secure the championship until on the final lap, contact knocked the chain off his powerplant, keeping him from reaching the checkered flag under power. Billy exited the kart and pushed his machine across the finish line, but it was not enough, dropping him from the top-five down to 19th. This gave Hays the championship by just 17 points over Musgrave. Four days separate the birthdays of Hays and 2015 title winner Christian Brooks. Hays celebrated his 15th birthday Saturday in Lancaster, while Brooks was still 14-years-old when crowned the title winner at the series finale and retains the title of youngest series champion. Nick Ramirez used three top-five finishes to secure the third step of the championship podium.

Another rookie shined in the Leading Edge Motorsport S2 Semi-Pro Stock Moto division, as Hunter Kelly edged out Hunter Pickett by a mere two points. The two battled back and forth throughout the season, with Pickett getting the early edge with three straight podium finishes. Kelly recorded three straight of his own before heading into the series finale. Both drivers recorded their worst weekend score of the season, thus counting the first five events for their championship total – with Kelly getting the title by a mere two points over Pickett. Last year’s S5 Junior champion Callum Smith won twice on the year, securing the third position on the championship podium in a tight fight over Robert Heck Jr. and Jason Pettit.

The Vemme Kart/Extreme Karting X30 Master class was dominated by veteran Mike Rolison on the year. Making his debut to the California ProKart Challenge, Rolison went on to win four of the five races he contested, all of them a round sweep to earn maximum points toward the championship. John Crow was second best, winning in the two races Rolison did not, along with one other podium finish to edge out three-time podium finisher Nick de Graaf in the standings. Three victories, including one at the Streets of Lancaster Grand Prix, helped Royal McKee earn the Outsource Utility Contractor S3 Novice Stock Moto championship. The advantage in the final standings is 115 points over Round One winner Garrett McKelvie. Adrian Yong finished the year in the third position, earning one podium result in the six rounds of 2016.

Alan Michel was able to beat out Robert Marks for the Nash Motorsportz S4 Master Stock Moto title. The results for each were very similar, as both took one victory on the season. Michel stood on the podium four times, with Marks landing on the steps five times. The difference counting the best five rounds was 35 points, giving Michel the championship. Gianfranco Casadei recorded four straight top-five finishes to close out the season in the third spot of the standings. Ken Schilling defended his Mike Manning Karting S4 Super Master Stock Moto title. Schilling won two races, placing runner-up in three others to secure his second straight championship. Darrell Tunnell finished the year in second, highlighted by two victories. Luke Bianco completes the championship podium in the third position.

Another driver to defend a title in 2016 was Anthony Willis, who became a two-time champion in the Professional Kart Support Mini Swift division. Willis stood on the podium four times in the six races, boosting a 106-point advantage to close out the year. Round One winner Dominic Gorden finished out the season second, as Round Four victor Jace Jones won the fight for third in the standings. Five straight victories to close out the season gave Kai Sorensen the Top Kart USA Micro Swift championship. Sorensen won nine of the 10 heat races in that span, including three pole positions and three fast lap bonuses. Round One winner Kailey Meris ended the year second in the standings, with Tuesday Calderwood completing the championship podium.

The 2016 year-end awards ceremony is scheduled for Saturday, October 22 at the BeX Bar and Grill in Lancaster, California. The top three drivers in the championship standings for each category will be honored – along with the California PKC Team of the Year – and will be presented with awards and prizes for their accomplishments. A number of exciting raffle prizes will be handed out during the evening’s festivities, as well. Tickets are $25 for drivers and guests, and $15 for children ages 4-10. The ticket includes a buffet dinner, unlimited fountain beverages and eligibility for the raffle prizes. Superkarts! USA welcomes all California PKC supporters, and asks attendees to purchase a ticket online by the Friday, October 14 deadline as no tickets will be available for purchase at the door. For more information and to purchase your tickets today, visit the SKUSA Banquet Page.