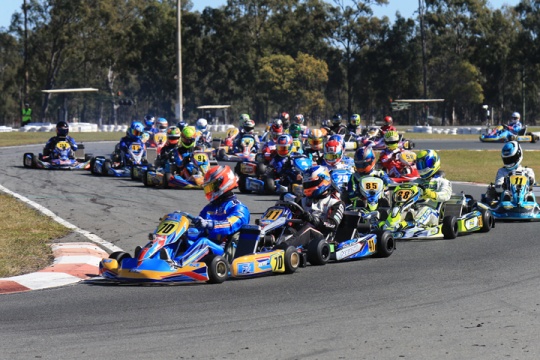 Press Release by: Karting Australia
The Race of Stars International karting event at the Gold Coast Motorsport Training Centre kickstarts the Gold Coast’s SuperFest this weekend.
SuperFest - an initiative of the Queensland Government, City of Gold Coast and Supercars Australia - is a community events program that provides support to organisations and groups wishing to host events and projects that contribute to the festival surrounding the Castrol Gold Coast 600.

The fourth annual event has attracted World Champions Paolo De Conto and Davide Forè from Italy along with Dutchman Marijn Kremers, competitors from Singapore, New Zealand and all parts of Australia.

No less than eight current or former Australian Champions will be among the 200 competitors lining up at the three-day event, where the fastest drivers will reach speeds of 160 km/h.

Forè is the two-time, and defending, winner in the elite KZ2 class. For his 2016 campaign he has paired with the locally-based Hashtag Racing outfit where he will also be mentoring rising star Tomas Gasperak.

Last year Forè was joined on the podium by Kremers and Sunshine Coast racer Kyle Ensbey after an epic battle. Forè arrived on the Gold Coast last week and spent the weekend in Ipswich testing his new equipment and acquainting himself with the Hashtag team.

De Conto’s Australian debut will be his first race since being crowned 2016 World Champion last month in Sweden. It is the first time that a current World Champion has competed in an Australian event for more than 20 years.

There will be seven classes of competition in action with the youngest drivers being in the Cadet 12 class. These drivers are aged between 9 and 12 years of age.

Local driver Brendan Nelson has dominated the TaG 125 class during the 2016 Australian Kart Championship, this weekend he will face another significant test with 46 drivers in action. It will be the largest field at the event with the battle for the 38 starting spots in the final set to be intense throughout the heat races.

As a part of SuperFest surrounding the Castrol Gold Coast 600 Supercars event the Race of Stars will be held on October 14-16 at the Gold Coast Motorsport Training Centre, Pimpama.

Practice begins on Friday ahead of qualifying and the heat races on Saturday with the finals to be contested on Sunday. The Gold Coast Motorsport Training Centre is located at 540 Pimpama Jacobs Well Road, Pimpama. Entry for Spectators is free.