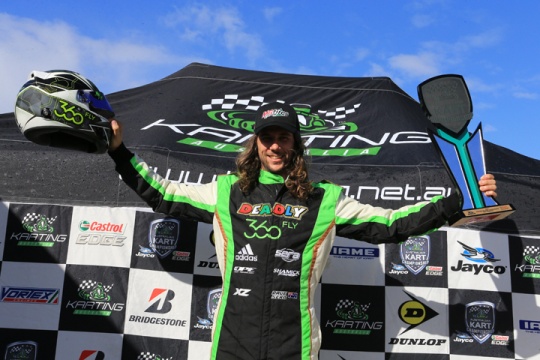 Press Release by: Karting Australia
David Sera has cemented his position as Australia’s greatest karting champion securing his 18th Australian Title and first KZ2 Championship at Port Melbourne’s Todd Road Karting facility on Sunday.
Sera had enough of a points advantage over Dutchman Marijn Kremers after the fourth heat race on Sunday morning to win the Championship in his Deadly Kart - the kart built by DPE Kart Technology to honour his achievements in the sport.

The KZ2 Final fell the way of Sera’s fellow Victorian Aaron Cameron who beat home the new Champion aboard his Kosmic Kart and round one winner, Chris Hays (BirelART).

The X30 Championship literally came down to the final lap of the final race to decide the Champion. Victorian Adam Lindstrom was leading and had enough of a points advantage over Queenslander Adam Mercer until a late race pass from Morgan Feast to take the lead pushed Lindstrom back to second.

In concert with the crucial lead pass, advanced past two karts in his Pacific Kartsport Arrow to score enough points to be crowned Champion. It was an emotional first Australian Championship for Mercer who had Supercars star, Chaz Mostert in his corner assisting him this weekend.

In a day of drama another Championship decided on the last lap was KA3 - the race fell to 15-year-old Cody Donald - who was the Championship challenger going into the final. Title leader, Matthew McLean had been shuffled as far back as seventh in the early running but fought back to second - advancing past both of the Nicolaou brothers late in the race.

Second place was enough to deliver enough points to hang on to the Championship for McLean - his first Australian Championship.

Cooper Webster won the KA4 Final which was also enough to win him the Championship. Benito Montalbano crashed in the opening lap of the final and had to wait to see what would happen between Cooper Webster and Jay Hanson - who were equal on points after the heats.

The pair of them swapped positions in the early stages of the race before Webster gained an advantage, he’d go on to win in front of Hanson and Travis Worton who came through for third.

West Aussie Brooke Redden won the TaG 125 Final in a strong fight getting home in front of Joshua Car and Mitchell Hewitt.
Just two drivers finished the KA2 Championship race final which was struck by a freak shower early in the race. When the heavens opened on lap nine, there were 11 karts that slid off the circuit in turn one.  Battling the limits of adhesion best was South Australian Zanardi Kart racer Cooper Hay won the race while Queenslander Jac Preston finished second, to the cheers of the large crowd in attendance.

In KA1 the Harrington Doyle Racing Arrow team split its strategy for the mixed track conditions sending Champion-elect Scott Sorensen out on wet tyres and Luke Flynn on dry rubber. Flynn’s choice proved to be crucial, as the track dried enough to allow him to sweep to the front to take the win over Ricciardo Kart’s Thomas Steele, who passed Sorensen on the final lap for second.
In Cadet 9, New South Welshman Ryan Tomsett’s third position was enough to create history and become the youngest Australian karting champion in history. South Aussie Ben Holliday won the race and Fraser Carr finished second.
In Cadet 12, Kobi Williams took the final win over Fletcher Harris and Tex Starr-McKoy. Thus brings to a close a thrilling final round of the 2016 Australian Kart Championship presented by Jayco and Castrol EDGE.

The Prize Ceremony for all winners and the $120,000 in prizes, including 12 international race opportunities were presented at a gala ceremony at Etihad Stadium on Sunday night.