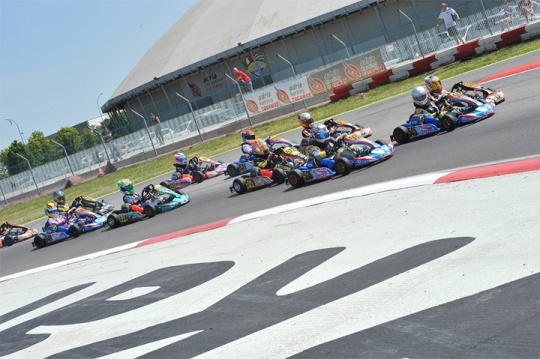 Press Release by: WSK
Spectacular event at the Adria Karting Raceway from 30th September to 2nd October. Top drivers and top teams of the international karting meet for the WSK Final Cup: 180 entrants expected to the KZ2 – OK – OKJ and 60 Mini categories. The live coverage of the Finals in streaming on www.wsk.it.
Great finale of the season with the WSK Final Cup live in streaming.

Great expectations for the last event of the season scheduled for next weekend: at the Adria Karting Raceway in Adria (Rovigo, Italy), all is ready for the WSK Final Cup, race promoted by WSK Promotion and its organization. This season has been particularly full of great WSK events, all hosted by the major Italian circuits. Among the competitions worth mentioning there are the four rounds of the WSK Super Master Series and many other important single round races. The circuit in Adria has been the venue of many of these thrilling races, such as the WSK Champions Cup at the beginning of the year and the WSK Night Edition during last Summer; and now the facility is getting ready for another great racing weekend, from 30th September to 2nd October. The WSK Final Cup will have a full media coverage of the final day thanks to the live streaming on www.wsk.it, which will broadcast the images of the Pre-finals and of the Finals, including the celebration of the prize-giving ceremony.

In the paddock of Adria, 180 drivers ready to challenge each other.

The paddock of Adria is ready to host the international teams and their drivers of the KZ2, OK, OK Junior and 60 Mini categories. Currently, there are 180 drivers on the list of the entrants, all ready to take part in the free practice scheduled from Wednesday 28th until the morning of Friday 30th. On Friday afternoon, it will be time for qualifying then the first heats. The last heats will be run on Saturday 1st October, just before the great finale on Sunday 1st, with the Finals of the WSK Final Cup which will be available also live in streaming.