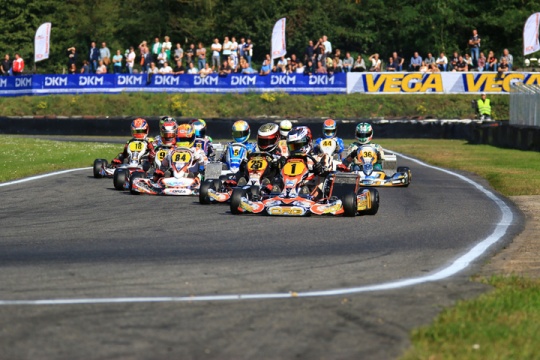 Press Release by: DKM
Next weekend the last decisions of the German Kart Championship are going to be made on the Erftlandring in Kerpen. Now that Paavo Tonteri already is the DKM champion, everything is still open in the three other DMSB grade series. All in all, 139 drivers are going to start into the final races.
At the beginning of May, the kick-off to the DKM season 2016 took place at the Prokart Raceland Wackersdorf. With full fields of participants and highly talented drivers, the highest German kart racing series got back to its old strength. Next to the event in Upper Palatine, the four DMSB grade series DKM, DJKM, DSKM and DSKC stopped in Ampfing, in Belgian Genk and at the Motorsport Arena Oschersleben. The last decisions regarding the fights for the championship titles are now going to be made on the 1.107m long traditional track in Kerpen.

Finn Paavo Tonteri (CRG TB Racing Team) is already champion of the DKM. He came out on top in Oschersleben due to a strong performance and achieved the title. The fight for vice championship is still exciting though. Karol Basz (Kosmic Racing Departement) and Jean-Baptiste Simmenauer (Tony Kart Racing Team) still have chances – both OTK protégés are only 12 points apart before the finale in the Erftland. The German driver with the best chances currently is Tim Tröger (CRG TB Racing Team). The young Saxon is currently on the seventh place. He can’t rest though: David Brinkmann (KSM Schumacher Racing Team) and his team mate Luca Lippkau (CRG TB Racing Team) are waiting for their chances on the eighth and ninth places. Both of them also want to end the year as the best German driver of the highest German kart racing series.

French Charles Milesi (Tony Kart Racing Team) lost his overall lead at the juniors in Oschersleben. Dennis Hauger (CRG Holland) from Norway showed an impressive performance at the Motorsport Arena and tied in with Milesi regarding season victories – both have won three races so far. The duo is accordingly close together on the overall list of rankings: With 14 points apart both of them still have justified ambitions towards the title. David Vidales (KSM Schumacher Racing Team) can feel quite secure already. The Spaniard is pretty safely on the third place. The German line-up is currently led by Luca Maisch (CRG TB Racing Team) on eighth place in front of Luke Wankmüller (Solgat Motorsport) and Marius Zug (rl-competition.com) on ninth and tenth places.

At the DSKM, Jorrit Pex (CRG Holland) could make history again. After third place in 2015, the Dutchman is currently on his way to his fifth title at the German Shifterkart Championship. The starting position couldn’t be better – first pursuer Marco Ardigo (Tony Kart Racing Team) is already 35 points behind. Contrary to the Italian, the drivers on the further positions don’t have any chances of stepping in the fight for the title. Davide Fore (Gold Kart Racing Team), Patrik Hajek (Kosmic Racing Departement) and Paolo De Conto (CRG Holland) are currently following on the third to fifth places. The most successful German driver Daniel Stell (SRP Racing Team) completes the top ten on tenth place.

The DMSB Shifterkart Cup is going to end a successful debut season in Kerpen. The championship belonged to the DKM for the first time and impressed with thrilling races. Before the final, rookie Max Tubben (CRG Holland) is currently in the lead. At the last event in Oschersleben, the Dutchman dominated the events and replaced his fellow countryman Symen Wiggers (CRG Holland) at first place. With an advance of 37 points, Tubben can start into the final races stress-free. A German driver is still involved in the fight for overall third place. Patrick Kreutz (RS Motorsport) was among the top five twice again in Oschersleben and thereby decreased his backlog towards the current third driver Christoph Hold (Maranello Kart SRL) from Austria. Another rookie follows among the top five: Dresden resident Maximilian Paul (NKS for Racing).

The season finale is already going to begin for the participants on Friday with the free trainings. Qualifying and the heats are then going to take place on Saturday, before the last decisions of the season are going to be made during the final races on Sunday. All fans can look forward to an extensive live-stream with more than 16 hours of live images again. All information can be viewed at www.kart-dm.de.