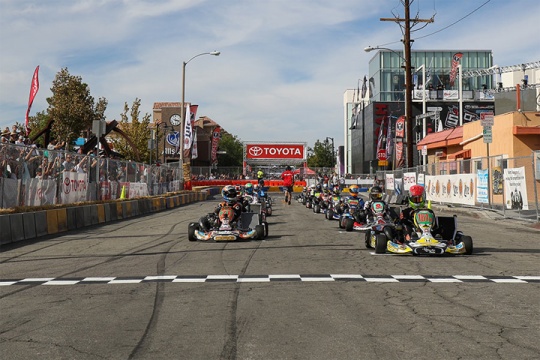 Press Release by: SKUSA PRO TOUR
Sixth and final round to decide 2016 series champions on the city streets of Lancaster on September 24-25.
The 2016 California ProKart Challenge is set to wrap up next weekend during the eighth running of the Streets of Lancaster Grand Prix driven by Sierra Toyota. Over the September 23-25 weekend, the city of Lancaster is set to welcome karters from all over the west coast to compete in a three-day festival event along The BLVD section of the downtown area.

The Streets of Lancaster is a unique event for the Superkarts! USA regional program, spanning over two days of on-track action around a very fast five-turn street course. Many drivers in the western half of the United States travel and compete in Lancaster as a warm-up for the upcoming SKUSA SuperNationals event, which is celebrating its 20th edition this November.

The City of Lancaster turns The BLVD into a street party Friday and Saturday, with a number of restaurants and businesses along the section of the downtown area welcoming racers and citizens of the Antelope Valley area. Friday and Saturday evening, the city welcomes dignitaries and event sponsors to participate in VIP races aboard the SKUSA rental kart fleet – giving them a small taste of what kart racing is all about.

Enjoy a glimpse of what the Streets of Lancaster Grand Prix is about at streetsoflancaster.com

For the first time in the event history, SKUSA will host two of the main events from the California ProKart Challenge program Saturday evening under the lights – and award a special prize to two winning racers. The S1 Pro and S2 Semi-Pro race group will be joined by the X30 Senior class as the two headline categories, completing all their on-track action Saturday, capped off with their main events at roughly 8pm when The BLVD is crowded with fans. The winner of S1 and of X30 Senior will be awarded a fully paid entry to the SKUSA SuperNationals 20, including race and rain tires, courtesy of the City of Lancaster and SKUSA. For a full schedule of the weekend, visit the SKUSA website.

SKUSA’s flagship regional program will decide its 2016 champions from the results in Lancaster. Billy Musgrave remains the championship leader in the two headline categories heading into the series finale. Musgrave is searching for his third 2Wild Karting S1 Pro Stock Moto title in four years. Defending champion Jarred Campbell is the lead challenger, with former series champion Jimmy McNeil right there as well. Campbell and McNeil have won on the city streets of Lancaster, while Musgrave has yet to enjoy the winner’s celebration Sunday afternoon. This will be his first year racing in the Phil Giebler Racing X30 Senior division at the Streets of Lancaster, heading into the event as the top driver in the title chase. Just eight points separate him and Senior rookie Nicky Hays. Last year, Hays clinched the California PKC title with a victory at Lancaster, hoping to do the same this year. Veteran Matt Johnson and Nick Ramirez still have an outside shot at a final push for the championship.

Each and every session of the Leading Edge Motorsport S2 Semi-Pro Stock Moto division in Lancaster will have an impact on the championship. Two points separate rookie Hunter Kelly and Hunter Pickett. Temporary circuits have not been kind to Pickett, while Kelly has two big wins as an S5 driver with victories at Lancaster and the SuperNationals XIX to close out his Junior career. Robert Marks has the advantage going into Lancaster in the Nash Motorsportz S4 Master Stock Moto standings. His lead is 198 points over Gianfranco Casadei, with Round Two winner Alan Michel looking to pull off an upset depending on the results in Lancaster.

Mike Rolison remains the driver to beat in the Vemme Kart/Extreme Karting X30 Master class, earning three wins in the four rounds he contested. Despite missing a round, he is the championship leader by 38 points ahead of two-time winner John Crow. Defending Mike Manning Karting S4 Super Master Stock Moto champion Ken Schilling has put himself in the lead position for the title once again, placing in the top-two spots in the first five rounds. With two wins, Darrell Tunnell is still in the hunt and trails by just 140 points. 2016 has been another growth year for the Outsource Utility Contractor S3 Novice Stock Moto class, and another solid field is expected in Lancaster. Royal McKee is the current championship leader, with Garrett McKelvie looking to remove the 81-point gap over the weekend.

Three-time race winner Dante Yu remains the point leader in the Ryan Perry Motorsport X30 Junior category. Two wins in the last two rounds has given him a hefty advantage going into the finale, with Oliver Calvo and Tomas Mejia trailing. Dean Heldt has clinched the RPG S5 Junior Stock Moto championship prior to the Streets of Lancaster Grand Prix, with a handful of drivers scheduled to compete at the finale event.

Three drivers are within 100 points of each other heading into Lancaster in the Professional Kart Support Mini Swift division. Defending champion Anthony Willis holds the top position by a 47-point margin ahead of Round Four winner Jace Jones. Round One winner Dominic Gorden is right there, as the trio will battle every session at the season finale. Kai Sorensen clinched the Top Kart USA Micro Swift championship following his fourth win of the season at the Santa Maria event. The fight remains for the final two positions on the championship podium, with four drivers entering the finale separated by just 105 points. Round One winner Kailey Meris holds the second spot ahead of Tuesday Calderwood, Frankie Mossman and Cooper Hunt.

Race pre-entry remains open until Tuesday, September 20 at the online registration section of the Superkarts! USA website – offering the discounted price of $405 for entry and stamped race tires. Move-in and registration desk opens on Friday, September 23 at 10am with a pit curfew of 10:30pm. On-track action begins Saturday morning, with a mandatory drivers’ and mechanics’ meeting at 7:30am and practice beginning at 8am. Pit spots can be reserved HERE prior to this event with two increments available - $20 for 10’x20’ or $40 for 10’x40’. Overnight camping is available beginning Friday evening, and can be reserved with pre-payment thru www.skusastore.com. The Oxford Suites is the host hotel, located just five minutes away from the downtown BLVD area. Additional event and track information is available at the California PKC Event Page.

Once again, those wishing to secure pit access can purchase 1-Day or 2-Day PKC pit passes on Eventbrite. This program offers an easier and quicker process of purchasing tickets prior to entering the paddock.

The 2016 California ProKart Challenge Awards Banquet is set for Saturday, October 22. SKUSA is asking racers to ‘Save the Date’ as details will be available in the coming days.