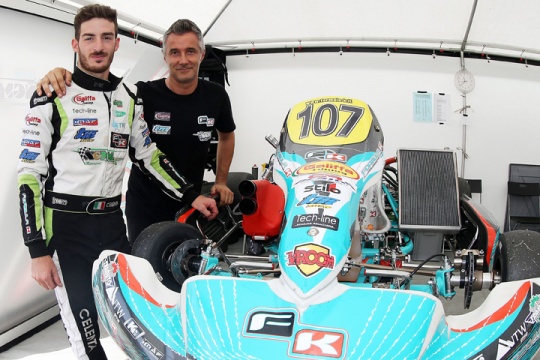 Press Release by: ACI Sport
In Sicily, Celenta confirmed to be on top of KZ2 with Race-1 victory and the second place of Race-2. Spectacular double win for Minì in 60 Mini. Prodriver Under title to D'Attanasio, Over's to Cirelli.
A top class spectacle has gone on stage in Sicily at the International Circuit of Triscina (Trapani) in occasion of the fourth and penultimate round of the Italian ACI Karting Championship in front of 3.000 spectators that followed all the finals with excitement and warmth. A total of 120 drivers have been on track in categories KZ2, 60 Mini, OK Junior, ACI Kart, ACI Kart Junior, Prodriver Under and Prodriver Over as the latter two run their third and closing round.

KZ2. The most powerful category, KZ2, has showcased once again the speed of Francesco Celenta on Formula K-Tm. The championship leader was determined to close in his favour the title of the category in Triscina. He has been a strong protagonist of all the two finals, taking the victory of Race-1 leading his main rival Mirko Torsellini on Exprit-Tm, before keeping his momentum taking a good second place in Race-2 having again the best of Torsellini with a overtaking move with two laps to go. This double result virtually handed Celenta the title, even in the tally 5 points are still missing to get the title before the round scheduled in Val Vibrata next October 16th. Among the other protagonists of KZ2, the young Simone Alogna from Paceco (Trapani) deserved a round of applause and took P3 in Race-1 behind Celenta and Torsellini, before claiming a stunning victory in Race-2 ahead of Celenta and Torsellini.

60 MINI. Spectacular an exciting races have characterized as usual 60 Mini, as the very young driver from Sicily Gabriele Minì, from Marineo (Palermo), has been again protagonist of a splendid double victory in the home race. The classification leader Minì (Energy-Tm) managed to have the best of one of his closest rivals in the standings in the first Final. The Spanish Josè Antonio Gomez on CRG-Tm run Team Gamoto was in fact second, while the third step of the podium went to Leonardo Caglioni on Evokart-Tm at the end of a good comeback race. Race-2 was won again by Minì despite the top 8 grid inversion. This allowed him to pull away in the classification. The podium was completed by Leonardo Caglioni in second and Luigi Coluccio on Tony Kart-Vortex in third.

OK JUNIOR. Giuseppe Fusco on Lenzokart-Lke won OK Junior's Race-1, while another Sicilian driver managed to win Race-2: Alessandro Greco on Tony Kart-Tm. Fusco led Andrea Rosso on BirelArt-Tm and the American Dillon Defonce on Lenzokart-Lke in Race-1, while Greco proceeded Leonardo Papalia on Tony Kart-Tm and Fusco (third at the end of a comeback started from P8 due to the grid inversion) in Race-2. Marzio Moretti (Tony Kart-Vortex) of Baby Race is still leading OK Junior thanks to the fourth place in Race-1 and the fifth in Race-2.

PRODRIVER. In Prodriver, Under and Over, the Italian title was up for grabs in both categories in the third and final round that followed the races of Castelletto and Adria. In Prodriver Under the title went to Filippo D'Attanasio (Parolin-Tm), who was second in Race-1, behind race winner Gandolfo David (VRK-Tm). D'Attanasio was fourth in Race-2, as the podium was occupied by Francesco Alaimo (Maranello-Tm), Giuseppe Nicolosi and Paolo Castagnetti, the latter two on GP-Tm. Race-1 podium was completed by Francesco Temperini on Tony Kart-Tm in third place, result that earned him the second place of the classification. The victory of the Italian Championship of Prodriver Over was obtained by Daniele Cirelli of team Taglienti on EKS-TK-Tm, who won Race-1 and ended Race-2 in fourth position. The podium of the first Race was completed by Claudio Tempesti, second on BirelArt-Tm, and by the Sicilian from Barcellona (Messina) who was third on Maranello-Tm. The second Final went to Paolo Beltramini on Tony Kart-Voretx, who was folllowed by Fausto Uzzo on BRM-Tm and by Tempesti ancora who was again on the podium in P3.

The closing round of the championship will take place in Sant'Egidio alla Vibrata (Teramo) next October 16 th.