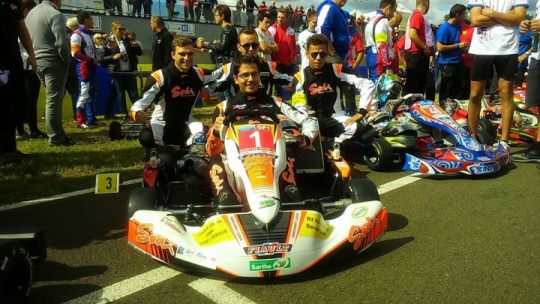 Author: Vroomkart International
The Team Sarthe RTKF sweeps the CIK-FIA 24h of Le Mans taking the first two positions with his two teams, 1 and 2. Team Rouen GSK rounds out the podium with the kart #55.
Le Mans is a different race, and CRG Racing Team (CRG/Parilla) knows it: after the pole position the Tinini’s squad composed by Felice Tiene, Pedro Hiltbrand, Flavio Camponeschi and Henk Waldschmidt loses the lead after the second hour of the race, finishing the race in 15th position. It would have been an incredible win for the black and orange team: another world title before the Bahrain.

The team Sarthe RTFK 1 with the Sodi/Parilla #1 confirms the 2015 triumph by winning over their teammates from Sarthe RTFK 2 on the Sodi/Parilla #72! The winning equipe composed by Fiault Charles, Becq Gautier, Petit Kévin and Hubert Anthoine gets the better of the second equipe by one lap of distance. Started from grid seventh the team composed by Bidard Maxime, Compere Victor, Godefroid William and Ricci Thomas finds his way to the second step of the podium, leading the race for several hours.