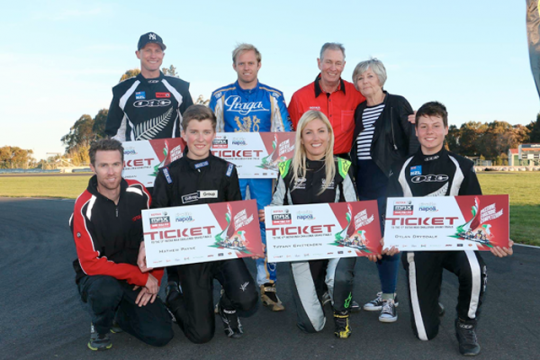 Press Release by: Kartsport NZ Inc.
Reigning DD2 Masters class title holder Ryan Urban of Auckland heads an experienced Kiwi squad which will contest this year's Rotax Max Challenge Grand Finals meeting in Italy next month.
The annual Grand Finals meeting pits national and regional Rotax Max Challenge class winners from around the globe against each other at a multi-day meeting held in October or November each year to find the best Rotax class drivers in the world.

Last year in Portugal Urban became the first Kiwi to win a class title at a Grand Finals meeting.

A veteran now of four previous Grand Finals campaigns around the world, Urban was one of five karters to have their spot on this year's New Zealand team confirmed at the final double-header round of the Giltrap Group 2016 New Zealand Rotax Max Challenge in Hamilton over the weekend.

Urban, a multi-time New Zealand sprint kart champion and also Superkart racer of note, was again the dominant figure in the DD2 Masters class during this year's Giltrap Group New Zealand series, claiming the local class title with the final double-header round to spare.

Rather than sit out the Hamilton meeting the 33-year-old went back to the DD2 class (he now runs in the 32 yrs.-and-over Masters division), finishing second on Saturday and winning the class outright on Sunday.

In Urban's absence, Aarron Cunningham from Auckland won the DD2 Masters class Rnd 7 Final on Saturday while top female driver Tiffany Chittenden guaranteed her place on New Zealand's Grand Finals squad for a second year running by winning the Rnd 8 Final on Sunday to finish second overall for the year to Urban.

The other driver at the meeting to guarantee his place on this year's Grand Finals squad early was Pukekohe teenager Matthew Payne who put the series' Junior Rotax title beyond the reach of anyone else with a win in the Rnd 7 Final on Saturday.

That allowed him to sit out the eighth round on Sunday, won in convincing style by Saturday runner-up Callum Hedge from Auckland.

It was less clear cut in the two other classes, DD2 and 125cc Rotax Max Light, where a spot on the Grand Finals squad was up for grabs.

Drysdale came out with all guns firing on Saturday, qualifying quickest and winning both class heats as well as the Pre Final. An engine failure in one of the heats put Connor on the back foot but the Auckland ace fought back to finish second in the Final, setting the stage for a last-ditch challenge on Sunday.

It was close too, but Drysdale again qualified quickest and  though beaten to the line in both the Pre Final and Final  by visiting Australian driver Josh Fife, finished enough places ahead of Connor to earn himself the series' class title and his third trip to a Grand Finals meeting, his first as a Senior after two as the local Challenge's top Junior.

Season-long protagonists Josh Hart and Mat Kinsman shared a similar scenario in DD2, with the series' class win and Grand Finals seat going all the way to the Rnd 8 Final on Sunday.

Hart won the first heat and Pre-Final, giving him the advantage going into the Final. When the pair clashed early in that race the result could have gone either way, but Hart was able to continue where Kinsman was not, meaning the Palmerston North driver earned series' class victory and his fifth trip to a Grand Final.

Like Urban, Joyes had the 2016 series' title wrapped up before the final double header round so chose to swap to the Lights (different weight division) class, finishing fourth in the Final on Saturday and third on Sunday.

In his absence, Keith Wilkinson from Auckland took up the mantle of man to beat in the Heavy class, claiming a qualifying and heat race/Pre-Final/Final clean sweep on both days.

After helping establish then run the annual Rotax Max Challenge series here for the past 14 years Gavin and Pam Bright and Tony Chambers of Rotax engine importer Right Karts in Auckland have sold the business and the Hamilton double-header round was the last they ran as the promotors.

The trio are particularly proud of the record set by the drivers who have earned a place on the Grand Finals squad in that time, Ryan Urban's class win last year in Portugal the icing on the cake.

Josh Hart and Christchurch driver Matthew Hamilton also has a strong record at the annual event, Hart finishing second in the Rotax Max Light class, and Hamilton third in DD2 in Italy in 2010.

Hamilton also has a third place finish in Rotax Max Light in 2009 in Egypt and before he made the move to cars, 2015 Le Mans 24 Hour race co-winner Earl Bamber finished third in Rotax Junior in 2004.

Between October 15 and 22 this year the five 2016 Kiwi squad members will join over 350 karters from more than 50 other nations to contest the 17th annual Grand Finals meeting at the Circuito Internazioale  di Napoli at Sarno east of Naples in Italy.