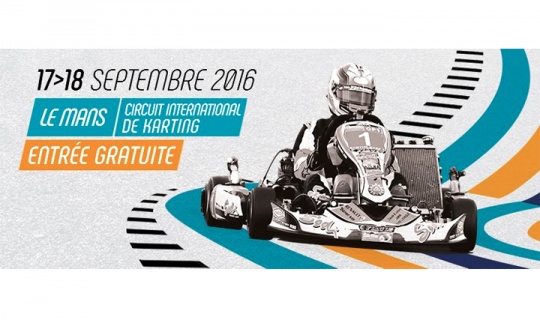 Author: Vroomkart International
For the first time in its history, the 24 Hours Karting of Le Mans is included this year in the CIK-FIA calendar as the CIK-FIA Endurance Championship.
The 31st edition of the famous ACO classic marks a major turning point with more international participation than ever. It is also gradually attracting major players from sprint karting to the world of endurance. The discipline itself is not new and has been part of the CIK-FIA Championships in the past.

This revolution has accompanied the debut of the new OK engines, which is no coincidence.

From the beginning, endurance has found its place in competition karting. For example, the main event for a long time, the 24 hours of Brignoles (FRA) was founded in 1961. The Automobile Club de l'Ouest (ACO), which launched the 24 Hours of Le Mans in 1923, the most prestigious car endurance race in the world, organised the first 24 Hours Karting of Le Mans in 1986 through its kart club. Since the creation of the new Le Mans Karting International Circuit in 2013, the ACO has expressed its willingness to organise major international competitions, hence the CIK-FIA World KZ Championship that took place at Le Mans in 2015.

It's therefore logical that the ACO and the CIK-FIA found common ground to revive the CIK-FIA Endurance Championship on the Le Mans karting track.

This exceptional event with strong media coverage also offers a good opportunity to broaden the appeal of the new OK engines, approved earlier this year. Simple, light and reliable with high performance, the OK has all the qualities to star at the 24 Hours Karting of Le Mans, in line with the engines that accompanied the rise of Karting. Only the minimum weight of the kart with the Driver on board has been adapted to the specifics of endurance from 145 to 155 kg.

The karts with OK engines in the CIK-FIA Endurance Championship will be grouped under the name GP1 during the 24 Hours of Le Mans Karting and compete simultaneously with the GP2 karts using one-make engines like the Rotax, Vortex Rok and IAME X30.

The Italian manufacturer LeCont won the CIK-FIA tender to supply each crew with the five sets of tyres allowed during the race.

Endurance karting is a team sport: four drivers will take turns every 45 minutes maximum driving a kart while their technicians play a leading role, both with the engines and for the strategy. As in any extended competition, the race also takes place in the pits.

Of the 31 teams entered in the 2016 24 Hours Karting of Le Mans, 11 will be in GP1 with the OK engine, which is already a success. Five chassis brands will be represented and three major engine manufacturers: Vortex, IAME and TM Racing.

On the French side, specialists abound, starting with the teams Sarthe RTKF 1 and 2 (Sodi / Parilla / LeCont) from Claude Jamin, seven-time consecutive winner of the Competition. In No. 1, Charles Fiault, Gautier Becq, Kevin Petit and Anthoine Hubert, a current F3 driver replacing Anthony Abbasse, will first face their teammates traditionally bearing No. 72: Maxime Bidard, Victor Compere, William Godefroid (BEL ) and Thomas Ricci. With No. 50, Manche Kartmag (Tony Kart / Vortex / LeCont), is one of the main rivals of the two RTKF teams with the flying Arnaud Bouilland, Bastien Leguay, Rémy Deguffroy and Paolo Besancenez. There will also be Wintec Centre (Sodi / Parilla / LeCont) No. 24, piloted by Alexander Vromant, Wilfrid Lecarpentier (a record winner), Enzo Coursimault and Renaud Bertin, as well as the No. 55 from Rouen GSK-REK (Sodi / Vortex / LeCont) with Sébastien Bailly (BEL), Benjamin Bailly (BEL), Nicolas Duchateau and Jean-Philippe Guignet, and the semi-official team No. 40 GTL Energy Corse (Energy / Parilla / LeCont) with Vincent Gendry, Tony Lavanant, Nicolas Markiewicz and François Surut. More so than in sprint races, the drama is constant, ensuring continuous suspense until the finish line.

The Competition will begin on Thursday, September 15th from 16:00 with unofficial Free Practice, 5:30 hours in total in day and night. Another session is scheduled at 2:20 on Friday morning before the official free practice from 1:50 p.m. to 2:20 p.m. Qualifying Practice will take place in four 10-minute sessions from 15:25: Q4, Q3, Q2 and Q1, to determine the starting order of the race. After a 30 minute warm-up on Saturday morning and a long presentation of the teams in the tradition of the 24 Hours, the grid setting will begin at 14:00 for a start traditionally given at 15:00.