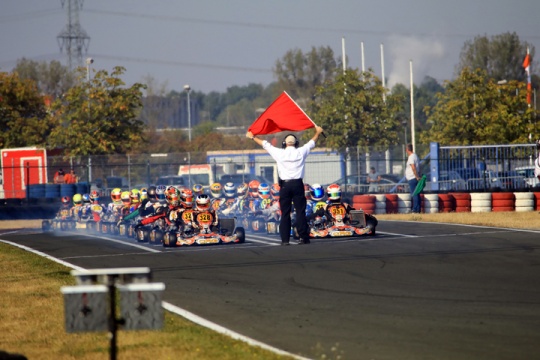 Press Release by: DKM
Red-hot battle in the Magdeburger Boerde. Paavo Tonteri is the first new DKM champion!
The Motorsport Arena Oschersleben welcomed 104 drivers to the next-to-last race of the highest German kart racing series last weekend. In midsummery temperatures, the drivers showed thrilling races and crowned the new German Kart Champion: Paavo Tonteri. Everything is still open in the other classes though.
After a long summer break things went off again at the German Kart Championship. 104 participants from more than 20 nations travelled to the ranked races seven and eight of the four grade series DKM, DJKM, DSKM and DSKC at the Motorsport Arena Oschersleben. The weather made for best conditions this time – the sun shone on all three racing days and caused midsummery temperatures.

The fields were closely together as usual on the 1.018m long track and there were thrilling wind shadow duels especially on the long start-finish straight. In the end, Max Tubben (DSKC), Leonardo Marseglia, Dennis Hauger (both DJKM), Jorrit Pex, Stan Pex (both DSKM) and Paavo Tonteri (DKM) won the races. The first decision regarding a title was made as well: Finn Tonteri prematurely secured the title at the German Kart Championship.

Dutchman Max Tubben (CRG Holland) experienced a perfect weekend. The rookie already dominated the events in Oschersleben on Saturday. After pole-position at qualifying, he also won both heats and started into the first ranked race from the first starting row. This was completed by guest driver Yannik Witte (SRP Racing Team) on second place. “I’m very content with our premiere at the DSKC. We’re planning to participate in all races next season”, said Witte on Saturday evening.
Tubben was able to continue his performance of the previous day on the final day. Due to a perfect start he took the lead during the first race and kept it throughout the 25 laps. Pursuer Witte managed to keep close but was never able to overtake his brand colleague. The CRG-podium was made perfect by third winner Max Weering (CRG Holland). He fought his way to the top three early on and drove a calm race. Fourth and fifth places were safe as well: After initial tough position fights, Patrick Kreutz (RS Motorsport) and Mark Potman (CRG Holland) drove away from the field and held their places.

Tubben was in his element during the second race as well and drove towards a clear double victory. He was accordingly happy at the finish line: “The races couldn’t have gone any better. After the successful Saturday I also won today and thereby took the overall lead of the championship. I’m now going to fight for the title in Kerpen.” Numerous overtaking maneuvers could be seen during the fight for the other places. In the end, Weering ended up on second place in front of Witte. The latter was later suspended from the ranking though. Christoph Hold (Maranello Kart Srl.) inherited his place in front of Kreutz and Swiss Marco Forrer (Mach1 Motorsport).

Championship ranking DSKC after 8 of 10 races:

Leonardo Marseglia (Tony Kart Racing Team) felt very comfortable on Saturday and led the top-class field of the juniors after the heats. During the first final race on Sunday, the youngsters showed lots of variety. Mads E. Hansen (TK Racing) achieved the best start and took the lead. Pursuer Marseglia could not be shaken though and used his chances towards the middle of the race. He overtook the Dane and set the pace at the front. He then celebrated his first victory of the season at the finish line. “I’m really happy about this. In the beginning I had some slight problems, but then things went considerably better and I won”, rejoiced the rookie at the finish line. After the lost lead, Hansen kept his second place in front of Dennis Hauger (CRG Holland). The championship favorite fought his way forward from 13th starting position to the podium. Sami Taoufik (Ricky Flynn Motorsport) followed on fourth place in front of best German driver Marius Zug (RL-Competition.com).

Norwegian Dennis Hauger proved that he belongs to the big title favorites once more during the second race. Just like in Ampfing and Genk, the CRG driver secured a race victory and thereby took the lead on the overall list of rankings. “Unfortunately I had to deal with a falling out during a heat and thereby fell back. Today I’ve shown our potential though. I want to thank my team for their great support”, the Scandinavian rejoiced on the podium. Marius Zug caused a lot of joy among the German camp. Having started into the race from fifth position, the Bavarian fought his way forward and celebrated his best result at the German Junior Kart Championship so far by coming in second. Moroccan Taoufik completed the top three. Kick-off winner Marseglia already fell back during the first lap and came in fourth in the end. Kas Haverkort (CRG Keijzer Racing) followed on fifth place.

Championship ranking DJKM after 8 of 10 races:

Davide Foré (Gold Kart Racing Team) was the fastest driver at qualifying of the German Shifterkart Championship. During the course of the heats he had to forfeit the lead to Daniel Stell (SRP Racing Team) though. The German showed a strong performance and gave a positive interim summary: “Unfortunately we weren’t always lucky throughout the course of the season, but I was able to show my potential today and want to tie in with this tomorrow.”

Stell used his top position and achieved the best start at the first race. He then had to bow to his opponent’s attacks after a couple of meters already though. Jorrit Pex (CRG Holland) took the lead during the second lap and drove off. With a considerable advance the four-time German Champion won the race. He also profited a little from the narrow fights among the field of pursuers. Six drivers fought for the remaining top positions. In the end, Patrik Hajek (Kosmic Racing Department) prevailed and came in second in front of Marco Ardigo (Tony Kart Racing Team). John Norris (KSM Schumacher Racing Team) followed on fourth place in front of Davide Foré (Gold Kart Racing Team). Pole-setter Stell fell back to seventh place.

Stan Pex (CRG Holland) replaced his brother Jorrit at the top during the second race and celebrated his first victory of the season. “It’s a great feeling to win against such a strong field of participants filled with several World and European Champions. The speed was great and I used my chance”, the youngest of the Pex family rejoiced at the finish line. Hajek, who had led the field previously, stayed calm though, kept close to the front and fended his pursuer’s attacks off. Jorrit Pex lacked the necessary speed for the two front positions but he collected important championship points on third place. Ardigo and Foré ended up on the remaining cup ranks.  Best German driver was Kevin Pieruszek (KSW BirelART Austra Racing Team) on eighth place.

Championship ranking DSKM after 8 of 10 races:

“I didn’t think it would already be enough for the Championship title here”, said the new DKM-Champion Paavo Tonteri on Sunday evening. He highlighted the fact that he deserved the title during the course of the two racing days. He already dominated the events on Saturday and was unstoppable during the finals on Sunday as well.
The flying Finn already achieved the best start during the first ranked race and drove off. Regarding the fight for the championship title a small preliminary decision was already made due to his fourth victory of the season. He also profited from a falling out of his strongest opponent Karol Basz (Kosmic Racing Department). The Pole had been on second place but then dropped out of the race due to a technical defect. Tim Tröger (CRG TB Racing Team) caused joy among the CRG TB Racing Team: The Saxon fought a thrilling duel with Noah Milell (Kosmic Racing Department). Both took turns on second place, in the end the German prevailed on second place though and achieved the double success of his team. Milell followed on third place in front of Luca Lippkau (CRG TB Racing Team). The Westphalian overtook David Brinkmann (KSM Schumacher Racing Team) during the last bend due to a strong maneuver and achieved fourth place.

After Tonteri’s dominant performance during the first race, things got more exciting during the second then. At the start he fell back behind his team mates Lippkau and Tröger. But due to two strong maneuvers he fought his way back to the front and controlled the pace. “I’d like to thank my team, CRG and KVS Engines for their support this year. Without their help winning the championship wouldn’t have been possible”, Tonteri rejoiced in the evening. Tony Kart-driver Clement Novalak followed on second place. The Brit closed the gap to the leading driver but didn’t get close enough. The decision regarding third place was only made shortly before the end of the race. Tröger, Jean-Baptiste Simmenauer (Tony Kart Racing Team) and Lippkau fought for the remaining place on the podium. At the finish line, Simmenauer was the first though and achieved third place in front of Lippkau and Tröger.

Championship ranking after 8 of 10 races:

After the thrilling battles in Oschersleben, the participants of the German Kart Championship are going to start at the big finale on the Erftlandring in Kerpen in two weeks already (September 23rd to 25th). Series coordinator Stefan Wagner can hardly wait for the last ranked races of the year: “I want to thank the ACV for the great organization of the event in Oschersleben and of course I’d also like to congratulate Paavo Tonteri. He’s shown a great performance at the DKM and deserved to win the championship. Things won’t get boring at the final event in Kerpen though: In the other three classes, the drivers are still really closely together.”

DKM is going to get even more international in 2018