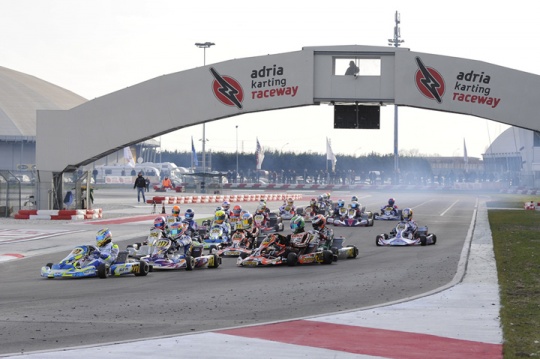 Press Release by: WSK
The WSK Final Cup at the Adria Karting Raceway is coming. It will be the closing event of a great WSK Promotion season with the categories KZ2 – OK – OK Junior and 60 Mini.
The WSK Final Cup to say goodbye till next year.

It is going to be a veritable celebration of the end of season: the WSK Final Cup, a single-round event to be hosted by the track in Adria (Rovigo, Italy), is scheduled at the weekend from 30th September to 2nd October. So, the Adria Karting Raceway is going to be the venue of the last event of WSK Promotion’s 2016 calendar, an event which has arrived at its sixth edition and which has always been the closing event of the WSK karting season.

On Sunday 2nd October, the live streaming from Adria.

A grand final stage for all the drivers who are going to take part in the WSK Final Cup of Adria, also thanks to the video coverage of races scheduled on Sunday 2nd October. All Sunday’s races, in fact, will be visible on the usual web channel on the official website www.wsk.it, which will air the images of the Pre-finals and of the Finals of all the categories admitted to the event.