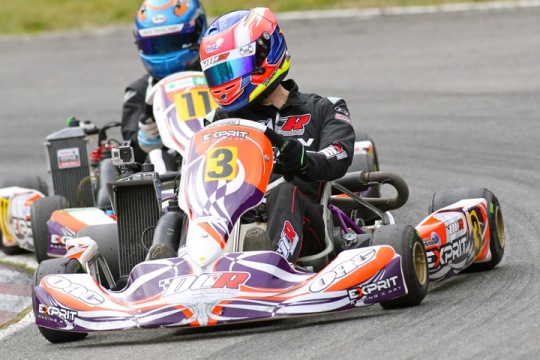 Press Release by: Kartsport NZ Inc.
The KartSport Hamilton club hosts the final double-header round of this year's Giltrap Group Rotax Max Challenge this weekend with the race for a place on the team to represent New Zealand at the annual Rotax Max Challenge Grand Finals meeting in Italy in October set to go down to the wire in at least two classes.
New Zealand has a proud history at the annual Grand Finals meeting, the icing on the cake Auckland driver Ryan Urban's history-making DD2 Masters title win at the 16th annual event in Portugal last year.

Having again dominated the DD2 Masters class here in 2016 Urban has virtually guaranteed himself a shot at defending his Grand Finals' title, though the new double-header race format adopted for this year's New Zealand Challenge means he still has to get through two separately scored days of racing this weekend.

Who exactly gets to go to Italy to contest the 17th Grand Finals meeting at the iconic Sarno circuit near Naples will not be known until the last Final on Sunday, however.

In the 125cc Rotax Max Light class for instance, last year's Rotax Junior rep, Dylan Drysdale from Palmerston North, finally turned the tables on defending class title holder Daniel Connor at the sixth round in Wellington last month. But his lead heading into the seventh and eighth rounds at Hamilton over early-season leader Connor from Auckland is a single point!

Last year's DD2 class representative Daniel Bray, who contested the CIK-FIA World KZ Championship meeting in Sweden last weekend, is also still in with a look as well, and will be home in time to try and improve on his current third place standing in the DD2 points, 18 behind Kinsman.

Pukekohe teenager Matthew Payne has a 25-point lead over Ryan Wood from Wellington in Rotax Junior, but if Aucklander Callum Hedge can repeat the form at Hamilton he showed at Wellington last month (where he swapping heat wins with Payne on both days before going on to win the Pre-Finals and Finals on each day) he could well be the driver to beat at Hamilton. And what that will mean at the top of the points table is anyone's guess.

Between October 15 and 22 this year 360 karters from more than 50 nations will gather to contest the 17th annual Grand Finals meeting at the Circuito Internazioale  di Napoli at Sarno east of Naples in Italy. This year is the third time the event has been held in Italy, the La Conca track south of the city hosting the ninth Grand Finals meeting in 2008 and the 11th in 2010.