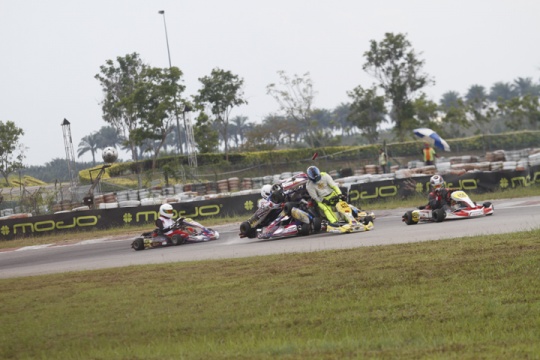 In the Micromax category, Shahan Ali Mohsin is leading the championship but his teammates, Hayden Haikal and Oscar Ng are just a few points behind. Before the race weekend, Shahan had food poisoning on Wednesday and was forced to sit out practising on Thursday, but resumed some practise on Friday. Shahan looked to be fully recovered as he was the fastest in the time trial session and show no signs of any earlier illness from the food poisoning. Shahan was told not to execute any rash overtaking moves as he is leading the championship. A top 5 finish would secure the championship for him. In the following Heat 1 and 2, Shahan just followed behind leader Amer Harris although in Heat 2, Shahan was much faster. On Sunday, all Micromax drivers had to use the fuel provided by the organiser as there were rumours of drivers adding addictives to the fuel. In the prefinal, Shahan dropped to 4th at the start but was able to recover back and followed closely behind Amer.  In the final, Hayden Haikal started 3rd on the grid, immediately overtake Shahan in lap 1 and proceed to chase Amer Harris but Amer was much faster. On lap 7, Shahan overtook Hayden but next lap, he lose it back to Hayden. Near the last 2 laps of the race, Hayden managed to close the gap and gotten close to Amer. Hayden managed to make a clean overtaking move on Amer but unfortunately it couldn't stick. Hayden also didn't want to take any risk as Shahan was also close behind him. In the end all 3 karts came up to the last corner but Amer crossed the line first, followed by Hayden and Shahan. Finishing 3rd was enough for Shahan to secure the overall championship which was his aim from the start.

In Seniors Gabriella Teo, the only female senior driver, was not able to participate as she had other commitments. Silvano Christian is the clear favourite in the senior category to win the overall championship with a buffer of 8 points from 2nd place Ricky Donison. Silvano didn't take it easy and drove nicely to win the heats and also the prefinal. In the final, abit of drama happened in lap 1 as Ferel Fadhil seems to have touch Silvano in the first corner, knocking him down to 4th. Ricky Donison too dropped down a position to 3rd but recovered back to 2nd. Silvano, after 2 laps, overtook back all 3 karts and gain back his lead position and powered on to break away from the pack. Ricky could only watch as Silvano sped away further and further. Ferel Fadhil has to go back into the pits as his kart was damaged in the collision with Silvano. With 5 drivers on the track, its Silvano 1st, Ricky 2nd, Darryl 3rd, Rifqi 4th and Nabil 5th.

The Juniors got underway and with the championship at stake it was bound to be hectic. Most eyes were on the two drivers at the front of the championship; Kane Shepherd and Praasetyo Hardja. Kane was leading the championship with just one point buffer but Prassetyo wiped it off when he won the prefinal and Kane finished 3rd. Its winner takes all in the final. At the end of the formation lap in the final, Prass didn't get a good start and instead it was Arsh Johany in the lead. Arsh started in 2nd, quickly grabbed 1st and powered on the moment the race starts. Prass quickly gave chase and with each lap, he managed to get closer and closer and on the last 2 laps, Prass made his move to overtake Arsh. It was a tensed moment as many will wonder if Prass will play safe or go for it and risk the overall championship. However Arsh wasn't going to give up like that and continue to fight with Prass in the remaining laps. At one point, it looked like Arsh was going to gain back the lead but Prass managed to defend well and crossed the finish line. Romain Leroux, drove quite well but he wasn't able to match Prassetyo's speed. Kane had to admit defeat as he could only finished 4th.

Senna SN with a substantial lead in the standings could afford to play it safe and emerge as the champion in the DD2 category. However he doesn't have any intention to hold back or take it easy and wants a clean sweep of the DD2 category. Senna again proved to be the man to beat as he come up tops in time trial, heat 1 and 2, prefinal and final. With the AMC championship set to go to Senna, the battle for the RMC Malaysia got off to a dramatic start. James Veerapen is leading the Malaysia champion by 1 point in front of Ariff. But in the heats, Ariff clearly show he is much faster and the 1 point buffer doesn't help at all. Just as things were looking bleak for James, Ariff was DQ for a post race technical infringement in heat 2. That put him quite far back in the middle of the pack in the prefinal. James drove a good race and managed to secure 3rd in the prefinal and boost his chances to win the championship. In the final, there were plenty of drama happening all over the track. Senna powered away the moment the lights goes off, Riki however was caught in a tussle with James and Nazim but managed to get out of it. As the race went on, James Veerapen kept falling behind until he was last. It seems he had a tyre punctured probably due to the earlier incident at the start. His rival, Ariff is only a few karts away so technically James can still win the Malaysia championship if he finishes the race.

Meanwhile at the back of the pack, the DD2 masters and veterans were fighting it out. 5-6 karts racing side by side into the corners and practically all over the place. One of the karts stuck in the pack was Nayan Chatterjee. He too got a tyre punctured and was trying to defend his line. Near the last 5 laps, Nayan's kart spun abit at the first corner of the track and the karts following behind had no way to maneuver away. Alan Saw and Thiru Kumaran climbed on top of Nayan, literally airborne, and landed back onto the track. All 3 karts managed to continue but Thiru's kart seems to suffer some engine damage.

Back at the front, Senna took the chequered flag, securing the AMC DD2 senior championship and Riki Tanioka, despite the DQ in last round, managed to safely secure his AMC DD2 master championship from his nearest rival, Chee Mang. Chee Mang, finished 8th, took the Malaysia DD2 master title. Handi Hardja, started slow beginning of the season, turned up his game and was in the top 10 of the pack, he finished 6th. James Veerapen blew his championship away when after he crossed the chequered flag, he did not go back to the pits to weight in and was DQ. With this development, Ariff is back at the top of the Malaysia DD2 senior championship. 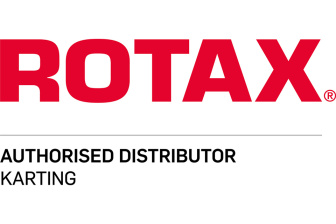