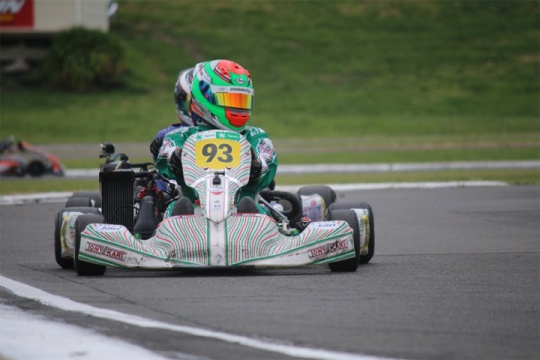 Press Release by: KartSport New Zealand
Fast-rising young female karter Rianna O'Meara-Hunt proved eqaul to the annaul challenge that is the KartSport Hawke's Bay club's two-day Blossom Sprint meeting over the weekend, winning seven of the nine heats for a dominant Junior Rotax classs win.
It takes a special driver to master the twin challenges of the long-running (this year's was the 49th) spring meeting, with racing conducted round the 687 metre Chemz Raceway kart track  at Roys Hill on the outskirts of Hastings in a clockwise direction on Saturday then anti-clockwise direction on Sunday.

O'Meara-Hunt, 15, from Wellington was the driver who grabbed the challenge by the scruff of the neck and gave it the best shake this year, winning four of the five Junior Rotax heats on Saturday and three of the four on Sunday to completely dominate the class. Callum Hedge (who with Palmerston North's Tom Greig was one of the only other heat winners) was second, fellow Aucklander Joshua Parkinson, third.

In other classes, also scoring multiple heat race wins on both days were the winners of the two Senior Rotax Max weight divisions.

Palmerston North ace Jacob Cranston won five of his nine class races to take top honours in 125cc Rotax Max Light from Ashleigh Stewart from Wellington, with Corey Green from the Bay of Plenty third, while Neil Butts came out on top in 125cc Rotax Max Heavy after a weekend-long battle with Peter Richardson.

The other class/GP double went to reigning Cadet ROK class National Schools' champion Logan Manson, the youngster from Levin edging out local Thomas Bewley to class honours by just one point but backing that win up with victory in the Cadet ROK Grand Prix race by a four-and-a-half second margin over Bewley with Pukekohe's Emerson Vincent third a further second back.

Finally, it was also close in the Open class with a single heat win, three seconds and four thirds (just) enough for Hamilton's Rhys Tinney to claim round honours by a single point from Taylor Harte from the Bay of Plenty (who won four heats) and Mathew Butchart from Nelson (who won one of the others).

It was just as close in the Open class Grand Prix race with Tinney getting the win by just 0.114 of a second from Brendon Jury from New Plymouth with Taylor Harte third, and Ashleigh Stewart's sister Madeline a similar gap back in fourth.