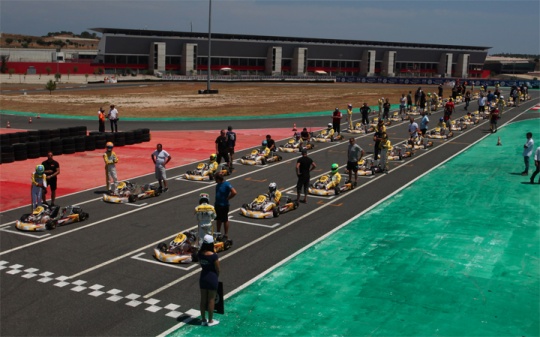 Drivers who will compete this weekend at the circuit of Kristianstad, Sweden, for the final race of the CIK-FIA Karting Academy Trophy 2016, will be 51 coming from all over the world.

The Swedish appointment comes after the young Academy riders challenged already in France (Essay) and Portugal (Algarve), at the wheel of perfectly identical chassis, made in accordance with the technical specifications given by the CIK and completely and carefully supported by the OTK Kart Group staff, who was able to plan any activity, other than competitive, concerned with the events.

The chassis at the disposal of young emerging drivers are the Exprit chassis powered by the Vortex DDJ engines. Also the Dakton data acquisition systems are the same, which components has given further enhancement to the success of the 2016 Academy Throphy edition.

The technical package (complete chassis) made available in each event is always high quality and equal, with engines that are raffled off and exchanged amongst the various drivers by the CIK-FIA staff, many times within the same event. The absolute transparency in the allocation process of the material has also enhanced the high quality standard guaranteed by the engines, fast and reliable without exception.

The race format as it is, allowed the Academy Trophy 2016 events to achieve an unequivocal success, confirmed by the appreciation expressed by drivers and partner.
Under a sporting point of view, it is necessary to highlight that at the summit of the championship, one race to the end, there is the British Callum Bradshaw, who performed well in both appointments, to the point of winning the race in Essay (F) and having the placed second in Algarve (P).

The top leader is followed at a safe distance from a group of drivers made up of the winner of the Portuguese event, Xavier Handsaeme (BEL), Mads Eielso Hansen (DKN) and Oliver Clarke (GBR). These last are all very close and will compete for the podium of the final standing, together with Alfred Nilsson (SWE), Kasparas Vaskelis (LTU) and Thomas Mialane (FRA).

To motivate drivers towards the CIK Academy Trophy 2016 title is also the prize for the winner, who will be given the wonderful opportunity to compete as Vortex official driver at the World Championship of OKJ category, next November on the Bahrain circuit.