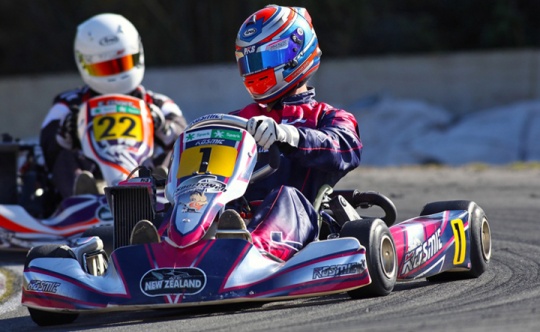 Drysdale, meanwhile, took the battle to defending 125cc Rotax Max Light class title holder Daniel Connor from Auckland. Connor won the class Final from Drysdale on Saturday, but Drysdale returned the favour in Sunday, turning a one point deficit to Connor heading into the Wellington meeting to a one point lead heading to the final double-header series meeting in Hamilton next month.

Third place finishes behind Connor and Drysdale in both Finals sees young Auckland driver Kaleb Currie third in the 125cc Rotax Max Light class points standings ahead of Chris Cox from Rangiora and Michael McCulloch from the Kapiti Coast.

Hart was one of four 'double-winners' at the Wellington meeting, claiming Rnd 5 honours in DD2 on Saturday from Dylan Drysdale's older brother Josh Drysdale, and Auckland-based international Daniel Bray, with Mat Kinsman fourth, and Rnd 6 class honours on Sunday from Kinsman, Bray and the Drysdale brothers, Josh and Dylan.

The other drivers 'doing the double' were Ryan Urban from Auckland in DD2 Masters, Campbell Joyes from Hamilton in 125cc Rotax Max Heavy and Callum Hedges from Tauranga in Rotax Junior.

On Saturday he claimed the DD2 Masters' Final win from top female driver Tiffany Chittenden from Christchurch and Callum Orr from Palmerston North, and on Sunday he qualified quickest and won both heats as well as the Pre Final and Final, the latter from Chittenden and Aucklander Garry Claxton.

Campbell Joyes was unbeaten in 125cc Rotax Max Heavy, the reigning New Zealand sprint champion winning all four heats and both Pre Finals and Finals, the later from Keith Wilkinson from Samuel Carpenter (both Auckland) on Saturday, and Wilkinson and Palmerston North driver Brendon Hart on Sunday.

Having missed the second double-header meeting of the season at Rotorua in April, Tauranga teenager Callum Hedge is not in overall series contention (yet), but that didn’t stop him stamping his authority on the Rotax Junior class at the Wellington meeting, swapping heat wins with series points leader Matthew Payne from Pukekohe on both days before going on to win both Pre-Finals and Finals.

Payne continues to lead the class points standings, however, from Wellington's Ryan Wood (who finished sixth in both Finals over the weekend) and O'Meara-Hunt.

The focus of this year's Giltrap Group New Zealand Rotax Max Challenge now turns to the final double header round of the year being hosted by the KartSport Hamilton club at its Agrisea NZ Raceway over the September10-11 weekend.