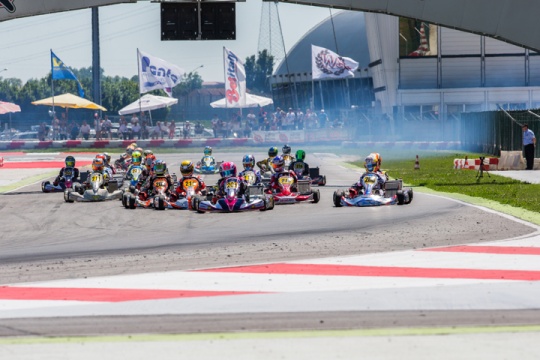 Author: Vroomkart International
More than half a season has passed; it’s time to make the point of situation for new CIK-FIA OK and OK Junior classes around the World.
The OK class reaches its peak in the CIK-FIA European Championship where there are more than 30 drivers racing. The WSK helped to introduce the class, as it was the first international series to race them after their debut during the Winter Cup in Lonato in February. There were about 30 drivers who were racing the OK class, but too few if compared to the OK Junior: where there were twice as many.

The international event had full grids, but things were different for the national championships, where OK karts are struggling to impose themselves as the most popular direct drive class. CIK-FIA’s aim, seems to be failed for the time being and the harmonization of international and national classes is still far away.

Europe, especially Italy, is the centre of the karting environment: nearly 80% of manufacturing companies are based in the north of Italy. Despite this, karting in Italy is going through a bad phase also because of the country’s general economical situation: after the introduction of these classes there still isn’t a national OK championship. The most important direct drive class isn’t present in the country where the majority of OK engines are made! But then again, the OK Junior class has an average of 16 drivers compared to 52 in KZ2. The OK classes are not racing in Spain either: in the national championship Senior and Junior drivers are powered by IAME X30, so it is a sort of single make series.
This sounds out of tune if we consider that in Switzerland, where there isn’t a motorsport culture as strong as Italy or Spain, there is the OK national championship, even if there are few drivers. The present hampionship leader is Fabio Leimer, ex GP2 driver who returned to karting.

In Europe the best scene for OK karts is Germany thanks to the German Kart Championship where official teams are racing alongside the European Championship: “I think the positive thing is the infrastructure of the DKM. Not only the OK is part of the DKM, also KZ2 and OK Junior is part of a race weekend. These give the teams an opportunity to drive in the DKM with all their drivers. Also the calendar is very positive” explains Björn Niemann, head of Fast Media. “The positive aspect of the new OK class is that, the new engine is more powerful, while the negative aspect is the new minimum weight: too low for most of the drivers”. Even if is the best scene, numbers are not too high: a maximum of 17 drivers entered for the second event in Ampfing: “If there aren’t any changes, it will be hard to get more drivers. Most of the young drivers step up to Formula 4 or other single seater classes. If drivers want to stay in karting, most of them change to the shifter classes. Karting must be interesting. The age to change into the single seater classes should be higher, 16 or 17, and then drivers will stay on after the OK Junior longer in karting.”
In UK, the MSA British OK and OK Junior Kart Championship is promoted by Super One Series and we have come to its second out of three events. During the Shenington SuperPrix, held on July 17th at the Shenington Kart Racing Club, Dean MacDonald and Jonathan Hoggard won the traditional MSA E Plates: winners of the OK classes can now sport the E for England champion number plate for next year. “I think drivers like it” comments Graham Smith, AbkC secretary “They like the performance and the grip from the tyres.  Performance is partly due to the lighter weight, although we in the UK are a little higher than the CIK to help the older or bigger seniors. A small minority is maybe frustrated; they have to use the official engine and don’t have a choice.  The Vega tyres have been wearing out much more than expected, so tyre management has come into play, helping the more experienced drivers.  The promoters have had to bring in a rule that if a tyre is changed they get one with similar wear and not a new one.  I have found the noise level is much less than I expected, not much more than Rotax, so that is good. Lap times (at Shenington anyway) is not quite as fast as KF2 (almost there) and KF3 yet.”

The championship is a sort of single make championship because it is raced with Vortex DDS and DDJ engines provided by Strawberry Racing, OTK dealer and technical partner of the Super One Series: “We have found from previous experience, especially with Super Cadet a few years ago, that if open engines are allowed then no manufacturer puts in much promotion and costs go up as everyone chases the latest engine modifications and so hire expensive engines.  Having had a tender for one engine, and including promotion in the tender means that manufacturer (and the tyre manufacturer) heavily supports the class with prizes (Strawberry gave an engine as prize to best senior and junior newcomer at the last round, and they bought the new E Plate trophies for the classes) and have done lots or PR and fliers to encourage competitors, they also have good prices for hiring and buying engines, same goes for tyre manufacturer / importer.  It has been a big success with new drivers coming in, some coming back from retirement and so on.   I am expecting the contracts to be extended into next year and maybe beyond. Regarding the number of drivers, I’m sure that it will increase: remember there are not many official MSA British Kart Champions, it is very prestigious and, although lots of drivers who have won Rotax, or other class may say they are a British Champion, they are not, they are a National Champion. To let this class grow nationally, I think that we need more rounds and maybe a Winter Series.  It is already being included at the Kartmasters Grand Prix for the GP Plate.  I think the bigger clubs could run club races.  Next year there is the possibility of more new classes coming into the UK and we don’t need more classes so maybe OK could become more popular than any new ones”.

At last, the OK class started also in France: on July 17th in Essay there was the “Coupe De France” where 13 drivers fought for the victory. This was the first out of two official FFSA Karting events, the local ASN: the second and last appointment, with the new OK class is the “Championnat de France” to be hosted in Angerville on October 9th.
Abroad, in non-European countries, the situation is even worse: in Japan,  they are racing KF, and for now, they are not considering to move to the new OK classes; the USA are mainly racing in single make series and other categories, depending on the championship but the OK class is not in their plans for now. UAE is not an exception: the famous Dubai O-Plate competition in 2017 will be raced with IAME X30 and Rotax categories.

In Australia they’re introducing a series powered by Vortex DVS to create a cheaper series that wants to emulate the OK class, but also for them, costs are too high for a brand new OK class to be presented.
“At this time we are closely watching the development of the OK classes in Europe” says Robert Hutton, Development and Administration Manager at KartSport New Zealand “The reports seem encouraging with numbers slowly growing. No decisions have yet been made. We need to be very careful not to have too many classes at the elite end. Our current focus is very much on the rejuvenation of the sport at the grassroots karting level. We had KF3 and KF2 in New Zealand for a number of years. KF3 was strong for a while but KF2 struggled for numbers. Both are now gone.

We are also watching closely the Australian introduction of one make Vortex DVS Senior and Junior engine classes, which are in their first year. This controlled spec ‘OK type’ engine concept may also be a better option, should we ever go with ‘OK concept’, for our small country (with only 1000 competitors). Currently the Rotax Junior, Senior and DD2 classes are our mainstays with Vortex Mini ROK for our two youngest age groups. We also have KZ2 which has been strong for many years. Our new grassroots karting engine is the Briggs LO206.”

As we could see, numbers are low if compared with the golden era of 100 cc, but the macro-economical conditions have changed and this is their first year. Let’s see how it goes.