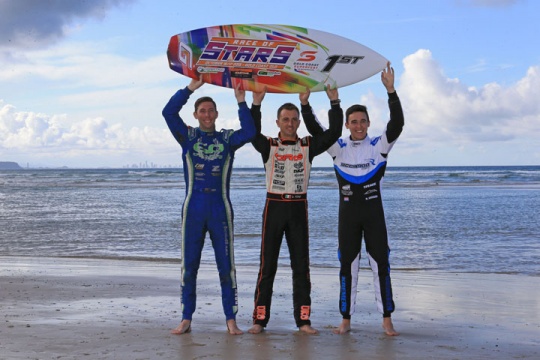 Press Release by: Karting Australia
The Race of Stars International karting event will again come to life at the Gold Coast Motorsport Training Centre on Queensland’s iconic Gold Coast this October.
As a part of SuperFest surrounding the Castrol Gold Coast 600 Supercars event the invitational race has been expanded to three days on October 14-16.

SuperFest - an initiative of the Queensland Government, City of Gold Coast and Supercars Australia is a community events program that provides support to organisations and groups wishing to host events and projects that contribute to the festival surrounding the Castrol Gold Coast 600.

“It’s fantastic to be able to support the Race of Stars again in 2016, an event that has become one of the most exciting and anticipated off track events in the Gold Coast calendar,” said Supercars Australia Off Track Event Manager Shane Porter “We have visitors who fly in from all over the world to take part and its great to be able to get behind Karting Australia as part of the celebration in the lead up to the Supercars Castrol Gold Coast 600.”

The Race of Stars will see the young drivers from ten years of age through to the most experienced in the international-standard KZ2 class in action.

“Since the first event in 2013 the Race of Stars has been developed into the ‘jewel in the crown’ of Australian karting.  It’s a one off event that has amazing appeal and we’re looking forward to another fantastic event in October,” said Karting Australia CEO Kelvin O’Reilly.“The Race of Stars is one of the most unique karting events in the world and provides a karting event that the Gold Coast community can proudly call their own. The involvement and support of Supercars through SuperFest is tremendous for the sport of karting.”

Ian Holm, owner and operator of the Gold Coast Motorsport Training Centre, welcomed the announcement of the event returning in 2016: “It is events like the Race of Stars that help make sure that the Gold Coast as a destination for motorsport drivers and fans from all across the world. All year round we have people coming to our venue talking about the Race of Stars and we’re delighted to be able to say it’s on again in October.”

After three successful events, that have attracted some of the World’s best drivers, Event Co-ordinator Lee Hanatschek believes that the 2016 event will again see Australia’s best line up against some of the world’s top drivers: “Throughout the past three years we’ve had the pleasure of seeing Australia’s best young drivers take on the world’s best and this year will be no different. By expanding to three days it will provide the opportunity for competitors to enjoy more track time on what is considered to be one of the most thrilling circuits in the country.  It will also allow them to experience more of the Gold Coast while attending the event.”

Karting classes that will form part of the Race of Stars event will be announced in the coming days.