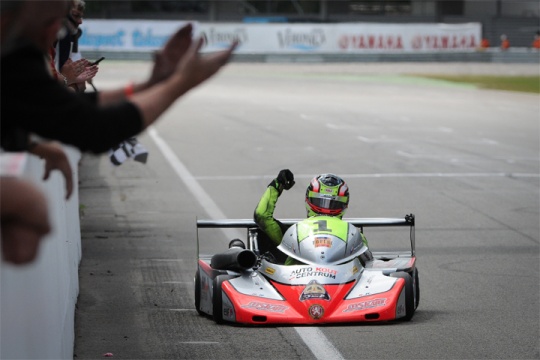 Press Release by: FIA Karting
The last Competition of the 2016 CIK-FIA European Superkart Championship ended logically with the deserved award and the second consecutive title for the Czech Adam Kout. But both Races were thrilling and gave the large audience a few twists, which is customary at Assen.
Qualifying was a good example of the duel over the last year between Adam Kout (MS Kart / DEA) and the German Peter Elkmann (MS Kart / VM), the two leaders of the Championship, but the Frenchman Emmanuel Vinuales (Anderson / VM) recalled the good memories of all. Elkmann thought he had the pole, but it was stolen by Kout. Yannick De Brabander (MS Kart / VM), who had experienced a difficult start, managed to take back his role as the third strong man and the revelation of the season.

Elkmann had the fastest start from Vinuales but Kout overtook and chased after Elkmann who had begun to escape. Kout saw the opening and flew off to take his second crown. Elkmann could not keep up a steady pace, so Vinuales and De Brabander caught up and passed. Andreas Jost (Anderson / VM) showed a good return to form. He almost joined De Brabander when he was already preparing to overtake Elkmann. The German managed to recover and reduce the gap to the top three drivers at the start of an epic last lap. Vinuales then had a gearbox problem and returned to the pits. Elkmann caught De Brabander, trying to outflank him, but the Belgian didn't allow it. Both drivers were attacking side by side on the home straight which benefited Elkmann by a few centimetres!
Behind Jost (Anderson / VM) in 4th, Daniel Clark (Anderson / VM) and Marcel Maasmann (Anderson / VM) were never able to touch the leaders. The title was already decided, and with four wins and a 3rd place he could not be surpassed in the standings.

The second Race also saw some twists especially at the end. De Brabander initially reacted promptly, and although there was an early reaction from Maasmann, he didn't last long, because of a ripped rear tyre. Elkmann followed De Brabander, but the Belgian was clawing tenths. Behind this duo, the fight was fierce. Morley seemed to have taken an advantage over Kout, Vinuales and Jost. The now twice European Champion allowed them to overtake initially and Vinuales passed his opponents as his chassis was now more stable. Morley gave himself a margin on Kout, Vinuales, Jost and the returning Clark. Morley accelerated, overtook Elkmann on lap 10 and even overtook the leader who was hampered by a backmarker. Vinuales put together successive fast laps (with the best lap of the race). This time he dropped those rivals (Clark retired) and regained ground to the race leaders. Everything seemed to be decided, but Morley was retaken by De Brabander. The Belgian held him off by two tenths. The podium and first win in Superkart for De Brabander were celebrated, with the Belgian temporarily in second place overall. However Morley and Vinuales were given 10 second penalties for overtaking under a yellow flag late in the race, which put Elkmann 2nd in both the race and the final standings.