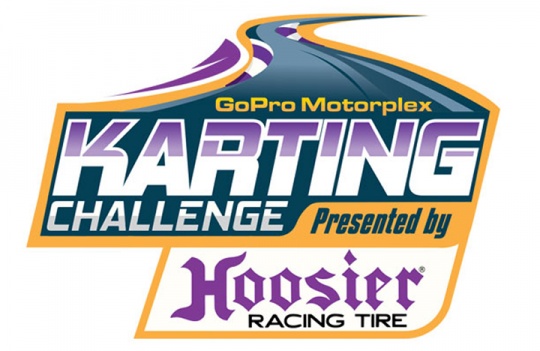 Author: Vroomkart International
A total of 79 drivers entered Round Seven of the GoPro Motorplex Karting Challenge Presented by Hoosier Racing Tire, it was an ideal day for karting with favorable weather and high-intensity racing.
Briggs LO206 Cadet Division Sponsored by EnforcerOne powered by FireAde:
In the Briggs LO206 Cadet Division 10-lap final, Aiden Baker Crouse charged into the lead by Turn Four of the opening lap. Behind him, a three-way battle for second ensued between Bree Miller, Alex Delemo and Jacob Graham. Miller benefitted from the battle, advancing to control second position after contact with Delemo. Crouse completed his perfect day with the win, followed by Miller in second and Hunter Yeany completed the podium.

IAME Swift Division Sponsored by HMS Motorsport:
A total of 15 young drivers took the green flag for the division’s 12-lap final race. Gray Leadbetter and Brent Crews were bumper-to-bumper for the lead during the opening laps. However, Aiden Baker Crouse joined the battle from the third position, making it a three-kart race. Qualifying and pre-final winner, Crews, controlled the lead with just a kart-length advantage over Leadbetter. With three laps to go, Leadbetter charged to the top position with a strong run into Turn One. Crews patiently waited and then battled back with a Turn Four pass for the lead, moving Leadbetter back to third. On the final lap, smart driving put Crews on the top spot of the podium, followed by Leadbetter and Baker Crouse.

IAME Heavy Division Sponsored by Stitch 98:
In the IAME Heavy Division, Todd Shambo shinned early to present himself as the driver to beat by winning the pole in qualifying and winning the pre-final. However, Shambo found himself chasing John Wehrheim for the top spot for the initial laps of the 12-lap final. By the halfway point, Shambo overtook Wehrheim for the lead. Shambo walked away with the win, followed by Wehrheim in second and Shannon Lee in third.

IAME Junior Division:
In the IAME Junior Division 12-lap final, Lance Fenderson was on rails again for Round 7. Fenderson has won every IAME Junior Karting Challenge race that he has entered so far this season, continuing his undefeated streak today. Fenderson took control of the lead early, while Cade Downes and Drew Lindley chased in second and third. By the halfway point, Sam Tisdale was on a charge, moving into the third position and beginning to reel in Downes for second. Leading flag to flag, Fenderson took the win, followed by Tisdale in second and Ashlyn Breuer in third.

Briggs LO206 Senior Division Sponsored by Todd Shockman RV Sales:
The Briggs LO206 Senior 12-lap final featured some new faces in the division, but the same familiar faces battling upfront. The top-three of Nick Tucker, Dan Koehler and Billy Duff ran bumper-to-bumper, breaking away from the field. By halfway, Koehler was out front showing the way over Duff and Tucker. On the final lap, the top-three packed into the Hoosier Hairpin turn causing contact between the frontrunners and sending Duff spinning off into the grass. Nick Tucker scored the win, followed by Koehler in second and Duff in third.

IAME Senior Division Sponsored by MPI:
In the IAME Senior division 16-kart field, it was one of the tightest races of the day with a nose-to-tail line of ten karts battling at the top of the boards. First in line was Blake Hunt by just a kart-length lead over Dusty Davis. By halfway, Hunt and Davis broke away from the field with Hunt still leading over Davis as laps wound down. Davis gave it one last try on the final lap, but just didn’t have enough, allowing Hunt to take the win, followed by Davis and Dalton Dow.

IAME Mini Swift Division Sponsored by CNC Performance Engineering:
In the IAME Mini Swift 10-lap final, Mateo Rubio-Luengo controlled the top spot over second place of Sam Corry. By halfway, Rubio-Luengo improved his lead to just over a kart length on Corry. For the final lap, Rubio-Luengo went unchallenged to win the final, followed by Corry in second and Alex Delemo in third.

Briggs LO206 Junior Division Sponsored by Race City Mobile Detailing:
In the Briggs LO206 Junior division 10-lap Final, it was Seth Gentry with the upset by leading early over qualifying and pre-final winner, Alex Keadle. However, Gentry wasn’t unchallenged, with Keadle chasing down Gentry and closing each lap. By halfway, Keadle had completely reeled in Gentry by closing onto his bumper. With just three laps to go, Keadle overtook Gentry into Turn Four for the lead. Keadle was able to walk away with the win, followed by Gentry and Jadyn Daniels.