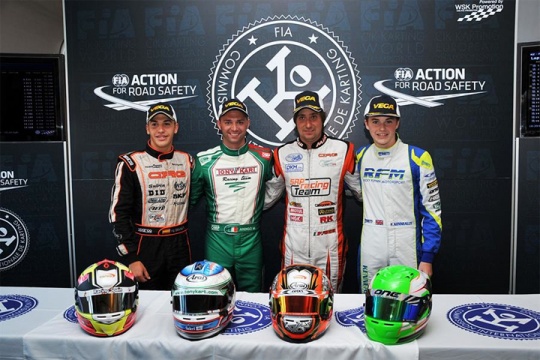 Tough, challenging, unpredictable: these are the adjectives that best describe this edition of the CIK-FIA European titles. The new Champions had to fight a hard battle to grab their well-deserved titles; a battle which, once again, demonstrated how demanding and spectacular karting can be. The last round of the Championship, hosted by the Horensbergdam Circuit in Genk (B), was a great motorsport event, which fans will be able to enjoy once more thanks to the special TV report on Motors TV next week. The highlights will help us understand how the four new Champions managed to win in their categories.

Hiltbrand wins the final sprint in the OK.

They arrived in Genk with a victory each in the previous rounds but, despite that, neither the English Tom Joyner (Zanardi-Parilla-Vega) nor the Polish Karol Basz (Kosmic-Vortex) had the upper hand. The Title, eventually, went to the Spanish Pedro Hiltbrand (CRG-Parilla), above, thanks to his second place in the Belgian Final, behind the English Clement Novalak (Tony Kart-Vortex). In this race, only Hiltbrand and Joyner battled for the Title, given that in the Prefinal Basz was obliged to retire for an engine failure. In the last stage of the decisive race, the Spaniard won keeping the English behind: the latter lost his 13-point lead he had over Hiltbrand after Portimao. Basz, who did not enter the Final, placed third in the Championship.

Kenneally attacks and wins in OKJ.

His name is rather new at European level, but Finlay Kenneally (FA Kart-Vortex-Vega), in the photo above, immediately left his mark winning the OK Junior title at his first attempt. A result achieved thanks to his consistency: the Brit, in fact, passed the three drivers ahead of him in the standings after the round in Portimao (P). For the Danish Noah Watt (Tony Kart-Vortex), the Brazilian Caio Collet (BirelArt-Parilla) and the Norwegian Isac Blomqvist (Tony Kart-Vortex) the round in Belgium was the toughest appointment of the season: they met lots of troubles and did not score many points. Kenneally was the runner-up in the Final, achieving his highest score of the season. He closed the 21-point gap with the ex leader Watt and won the title two points ahead of the Danish driver. The French Victor Martins (Kosmic-Parilla) had an outstanding season finale: thanks to his second victory in a row in Genk he managed to score the third position in the Championship.

Ardigò confirms his leadership in KZ.

The Italian Marco Ardigò’s season (Tony Kart-Vortex-Vega), above, was excellent: he won the European KZ Title thanks to his victories in the first and in the last round of the Championship. His performance was so good that his opponents did not stand a good chance: the French Jeremy Iglesias (Sodi-TM) did not even manage to close the two-point gap he had after the round in Zuera. On the contrary, it was the Czech Patrik Hajek (Kosmic-Vortex) to gain positions and placed second ahead of Iglesias thanks to the third place scored in the Prefinal.

Federer keeps the leadership and grabs the KZ2 Title.

His good results at the beginning of the season helped the Italian Fabian Federer (CRG-Modena-Vega) to win the Title. Federer arrived in Genk as the leader of the KZ2 category thanks to a second place and a victory scored in the first two rounds of the season in Essay and Adria, but he was forced to retire in the Prefinal 1, won by the Italian Matteo Viganò (Top Kart-Parilla). The Dutch Stan Pex (CRG-Vortex) could not take advantage of the situation: overtaking the leader was not an easy task despite Pex was trailing by only three points after the second round. In fact, according to the regulations, he had to discard a score. That’s why his fourth place in the Final was not enough for him: he finally placed second, ahead of an excellent Viganò.