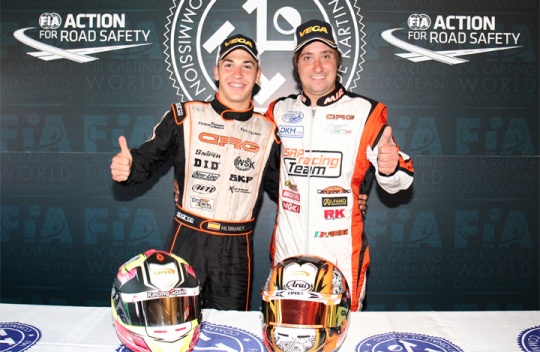 Press Release by: CRG Racing Team
CRG secured two European CIK-FIA Championships out of the for titles up for grabs in Genk (Belgium). Pedro Hiltbrand won the OK title, as Joyner secured that of vice-champion, Fabian Federer secured the victory of the KZ2 title with Stan Pex vice-champion. Teddy Wilson also put in good race ending on the podium of OK Junior, while Simo Puhakka and Paolo De Conto got on the podium of KZ.
What an exciting round of Genk! This has been a very satisfying European Championship for the whole CRG team. The Italian outfit has been the unquestioned protagonist of all four categories on track in this closing CIK-FIA round of the European Championship valid for KZ, KZ2, OK and OK Junior. The final haul includes two European titles: with Pedro Hiltbrand (OK) and with Fabian Federer (KZ2), and a great competitiveness also in KZ and OK Junior.

In OK, the title was a private matter involving only Pedro Hiltbrand (CRG-Parilla) and Tom Joyner (Zanardi-Parilla), that have been in the fight until the final round of Genk. They have produced a good weekend completed with a stunning one-two in Prefinal, when Hiltbrand proceeded Joyner at the flag, which meant being a step closer to the title. The title eventually was won by Hiltbrand who obtained an excellent second place in the Final, while Joyner had to settle for P4. Thanks to the double win in Adria, the podium of Portimao (Portugal) and that of Genk, the Spanish driver of CRG secured the title of European Champion. Joyner is the European vice-champion.

In KZ2, Fabian Federer on CRG-Modena run by team SRP was the favourite to the final victory after the double win scored in Adria and the second place obtained in Essay. Federer could have been challenged for the victory only by CRG Holland’s Stan Pex and by Luca Corberi, especially after Federer’s retirement in Prefinal due to a problem to the spark plug of his engine, that did not allow him to run the Final. In the Final, Corberi had to retire due to an incident that also involved Tommaso Mosca (Maranello), with both drivers hit from behind at the first corner. Stan Pex could not aim to the victory in the Final and had to settle for the fourth place. Thanks to the jokers, the European Title went Fabian Federer’s ways, even if he did not partake in the closing final of Genk. Stan Pex earned anyway the title of vice-champion. Fabian Federer repeated the victory of the European CIK-FIA KZ2 that he secured back in 2011.

Felice Tiene completed a very good comeback race on CRG pushed by Tm engine by Galiffa. He ended the Final in seventh place after being seventh in his Prefinal, despite starting from last as he hit problems to the clutch in the heats. The Japanese Fuma Horio also managed to take part in the Final ending 21st on CRG-Tm, while Fabrizio Rosati was 27th on CRG-Maxter.

DENNIS HAUGER MISSING OUT ON THE OK JUNIOR TITLE

In OK Junior, CRG was very close to taking the third of the four European CIK-FIA titles available in Genk. Dennis Hauger, on CRG-Parilla was contesting the title, but the young Norwegian driver could not make his dream come true as in the Final he suffered a performance drop, after being second in the Prefinal. Hauger ended sixth the Final after  taking an early lead. All in all this was not a bad result, as Hauger manged to be protagonist of the category in his debut season in OK Junior after the move from 60 Mini.

CRG colors on the podium of Genk were represented by the British driver Teddy Wilson, who claimed a great P3 on CRG-Parilla showing a crescendo of results. The Spanish driver Kilian Meyer put in a great debut race on CRG in OK Junior, after partaking in the Rotax and X30 Iame earlier in the year. Meyer was 11th in the Final after a great third place in his Prefinal. Esteban Muth also run a strong race, despite the 10s time penalty that relegated him to P21 from the ninth place.

GOOD RACE FOR PUHAKKA AND DE CONTO IN KZ

In KZ, Simo Puhakka and Paolo De Conto, both on works TM engines, showcased CRG performance, taking a good podium and making good display of the great competitiveness of the Italian outfit ahead of the important World Championship round to be held in Sweden next September 4th. Puhakka was second at the end of a nice comeback race, while De Conto closed his effort in the final with an excellent P3. The exiting European Champion Flavio Camponeschi was involved in an incident with Jorrit Pex and Lammers early into the race. The championship had been already virtually in the hands of Ardigò, and he managed to confirm himself as winner of the KZ European Championship for the fifth time.