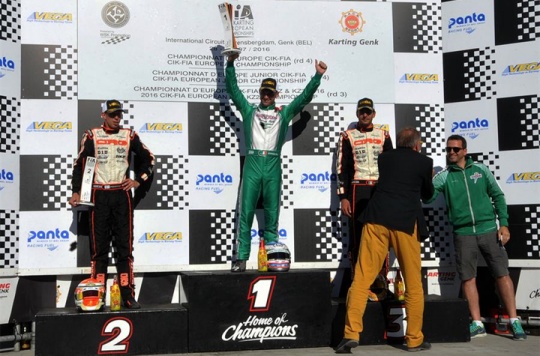 Such an eventful finale was what karting needed to make this end of season as exciting as ever. In Genk (B) there was room for unexpected and surprising results in the final round of the CIK-FIA European Championship (above, the start of the KZ Final) hosted by the Horensbergdam Circuit. The outcome of the finals was so uncertain that we needed to wait until the very end of the last races to know the names of the new European Champions. The highlights of the whole racing weekend on the usual special TV report on Motors TV next week.

Martins wins in the OKJ, Kenneally grabs the Championship.

Victor Martins (Kosmic-Parilla-Vega) achieved a dramatic victory in OK Junior, in a Final where the French driver shared the leadership of the race with the Norwegian Dennis Hauger (CRG-Parilla) and the Moroccan Sami Taoufik (FA Kart-Vortex). This battle brought sudden changes to the Championship standings, given that the Danish Noah Watt (Tony Kart-Vortex), who arrived in Genk as the category leader, was battling to close the gap from the last positions after a rather troublesome start. The English Finlay Kenneally (FA Kart-Vortex) used his skills to join the leading pack, arriving behind Martins, while his fellow countryman, Teddy Wilson (CRG-Parilla), placed third (above, the OKJ podium). Thanks to this result and to Watt’s unlucky performance, Kenneally won the title.

Novalak beats Hiltbrand in OK, but the latter wins the Championship.

The Spanish Pedro Hiltbrand (CRG-Parilla) aimed at taking over the OK leadership from the English Tom Joyner (Zanardi-Parilla); he gained the early lead of the Final, followed by Joyner. On the other hand, the second stage of the race went well for the English Clement Novalak (Tony Kart-Vortex), who closed the gap with the leading pair and, eventually, managed to take over the leadership from Hiltbrand. The Spanish was the runner-up, ahead of the Russian Alexander Smolyar (Tony Kart-Vortex), who passed Joyner when the race was halfway: this result allowed Hiltbrand to put his hands on the Championship. Above, the OK podium.

Viganò wins in KZ2 but Federer keeps the title.

It was Matteo Viganò’s (Top Kart-Parilla-Vega) big day: he gained the early lead of the KZ2 Final and kept it until the end. He achieved and prestigious victory in Genk: only had some troubles when Leonardo Lorandi (Tony Kart-Vortex) passed him, but then Lorandi was hit by a penalty because he overtook with yellow flags out. So, the runner-up was the Irish John Norris (Tony Kart-Vortex); third position for the French Paolo Besancenez. This final standings helped the Italian Fabian Federer (CRG-Modena) – who had not qualified for the Final because his spark plug broke during the Prefinal- keep the head of the Championship: in fact, the Dutch Stan Pex (CRG-Vortex), the only driver who could threaten his position, scored only a fourth place.Above, the KZ2 podium.

The main rival in KZ for the Italian Marco Ardigò (Tony Kart-Vortex-Vega) was the French Anthony Abbasse, who tried everything he could to beat his rival. Abbasse had a great start and took the leadership, but after a third of race, Ardigò gained the head and won both race and title. Behind him, the Finnish Simo Puhakka (CRG-TM) and his team-mate, the Italian Paolo De Conto (above, the podium). During the last laps, Puhakka managed to get really close to Ardigò, but the Italian kept him at bay, securing the victory of the race and of his fifth European title.