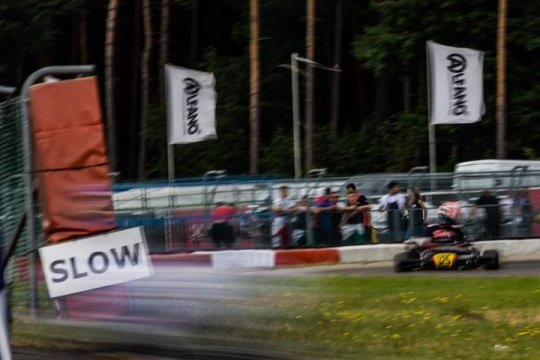 Author: Vroomkart International
A little contact with Leonardo Lorandi and Fabian Federer is out, and his championship is over. The Baby Race driver wins the race starting from P6. In the second prefinal Matteo Viganò takes the lead and pulls away. Andre Matisic is second and Luca Corberi third.
PF1

It takes only two laps for Leonardo Lorandi (Tony Kart-Vortex) to take the lead: the Baby Race driver is in perfect shape and passes his rivals easily. During his comeback the Italian touched the championship leader Fabian Federer (CRG-Modena Engines), who a few laps laters is forced to the pit and finishes his European championship. This DNF leaves John Norris (Tony Kart-Vortex) and Alexander Schmitz (BirelART-Vortex) settling the other two podium places among themselves, with the Irishman who gets the better of German driver. Immediately out of the podium there is Stan Pex (CRG-Vortex) who smiles thinking to the title…

Luca Corberi (Tony Kart-Vortex) misses the opportunity to make the most of a good start, and Matteo Viganò (Top Kart-Parilla) grabs the lead followed by Alessandro Irlando (Energy Corse-TM). The three Italian drivers set the pace of the race leading until lap 9, when Corberi overtakes Irlando giving the possibility to Andre Matisic (BirelART-TM) to overtake them. Viganò pulls away followed by the German and Corberi, while Tommaso Mosca (Maranello-TM) gets the better of Alessandro Irlando.