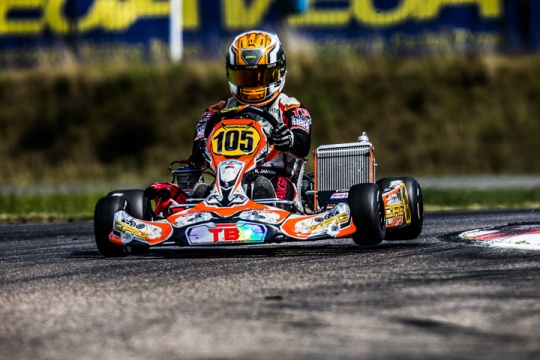 Author: Vroomkart International
With dry track drivers disputed qualification heats, and the fight for the title now has some favourite competitors.
KZ

Marco Ardigò (Tony Kart-Vortex) has a perfect day in Genk winning both heats simply dominating on his rivals, giving them no possibility to win. With two clear wins he secures the pole position for the prefinal race. Anthony Abbasse (Sodi-TM) said us in Adria that he will be back on top in Genk, and he is confirming what he said: with a second and a third in heats he will start the prefinal alongside Ardigò on first row. Third place for Jorrit Pex (CRG-Vortex) that holds off Patrik Hajek (Kosmic-Vortex) in fourth. The other title pretender Jeremy Iglesias (Sodi-TM) has to settle for sixth place behind Paolo De Conto (CRG-Maxter).

After the pole position German Alexander Schmitz (BirelART-Vortex) is dominant throughout heats winning all of them. KSW BirelART Austria driver gets the better of Alessandro Irlando (Energy Corse-TM) in the final heat where the Italian driver has to settle for the second place behind the poleman. Third place for championship leader Fabian Federer (CRG-Modena Engines) who will start the prefinal 1 in front of his rival Stan Pex (CRG-Vortex), fifth overall behind Luca Corberi (Tony Kart-Vortex).

Hannes Janker (CRG-Parilla) is still the men to beat in Genk: after the pole position he sweeps the qualification heats winning both of them from flag to flag with no rivals between him and the chequered flag. Tony Kart driver Clement Novalak (Tony Kart-Vortex) will start the prefinal on first row thanks to a second and a fourth place in heats. The Brit has the same score of Pedro Hiltbrand (CRG-Parilla) who is in third. The Spaniard is the first of title pretender, because, despite a win, Karol Basz (Kosmic-Vortex) is seventh, while championship leader Tom Joyner (Zanardi-Parilla) is eleventh. Behind Hiltbrand there is the terrible lady Marta Garcia Lopez (Evo Kart-Parilla), who is ready to fight for a final podium place in her first year in OK. 2016 WSK Super Master Series winner Lorenzo Travisanutto (Tony Kart-Vortex) could do his part in the fight for the final crown starting the pefinal from the fifth place on grid.

With three wins in three heats Victor Martins (Kosmic-Parilla) grabs the pole for prefinal 1, and shows once again his potential: the Frenchman since the round in Portimao is simply unstoppable. Second position for Ricky Flynn Motorsport driver Finlay Kenneally (FA Kart-Vortex) who will start the prefinal 2 in first position. CRG’s Dennis Hauger (CRG-Parilla) rounds out the overall podium ahead of Sami Taufik (FA Kart-Vortex). Championship pretenders Noah Watt (Tony Kart-Vortex) and Caio Collet (BirelART-Parilla) are in 15th and 50th position: Danish driver is excluded from the last heat, while Brazilian is forced to a great comeback for a contact during qualifying. Isac Blomqvist (Tony kart-Vortex) must be able to make the better of this situation, starting from grid 12th.