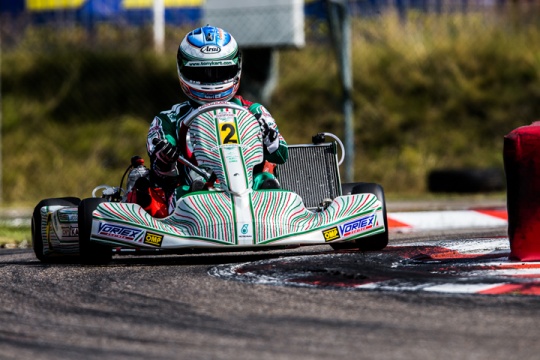 Author: Vroomkart International
Variable wheather conditions make this second day in Genk harder for teams and drivers: sun and rain alternated throughout the morning. On afternoon finally drivers had the possibility to run on a dry track.
Difficult conditions for drivers who have to find the right set up for the weekend: some rain fall in the morning made the track humid and they didn’t have the possibility to find the perfect balance. Qualifying, on the other hand, were disputed on dry track.

Douglas Lundberg (Mach1-TM) is the fastest of free practice  posting a time of 51.295 seconds in the third session. Top drivers don’t show their cards: Marco Ardigò (Tony Kart-Vortex) sets the fastest time in the second session with wet track, but in the third session he is in 12th position. His main rival Jeremy Iglesias (Sodi-TM) is behind him in 14th place, while Patrik Hajek (Kosmic-Vortex) is only 21st.

In a very hard fought qualifying, Ardigò finally finds a good lap and grabs the pole thanks to a 51.216 seconds lap. Second position for Flavio Camponeschi (CRG-Maxter) just tree tousandth of second behind the poleman, with Jorrit Pex (CRG-Vortex) in third. Jeremy Iglesias is 11th, while other title pretender Patrik Hajek is in 5th place. Thanks to this pole, Tony Kart driver widens his gap and makes another step to the final crown.

Pierre Loubere (Sodi-Parilla) is the poleman with a time of 51.110 seconds, followed by Alexander Schmitz (BirelART-Vortex) and Luca Corberi (Tony Kart-Vortex), back on top after the healty problem of Adria. Federer is on 5th place, while Stan Pex is slower: 51.352 his time which gives him the 9th place.

Karol Basz (Kosmic-Vortex) sets the fastest time during the last session of free practice with dry track: 51.879 seconds for the reigning world champion. Championship leader Tom Joyner (Zanardi-Parilla) is in 5th place while Pedro Hiltbrand (CRG-Parilla) is 9th. Marta Garcia Lopez (Evo Kart-Parilla) is in 15th, but she is trying to close the gap with her rivals.

Finlay Kenneally (FA Kart-Vortex) makes the most of the dry track scoring the fastest time in the third session of free practice. He is faster than his rivals for more than a tenth of second.

Victor Martins (Kosmic-Parilla) shows once again that he could be an outsider for the final race being the poleman. Behind him the championship leader Noah Watt (Tony Kart-Vortex) is more than a tenth of second slower, settling for second position. Gillian Henrion (Kosmic-Vortex) rounds out the podium. Caio Collet (BirelART-Parilla) has no time due to a contact.