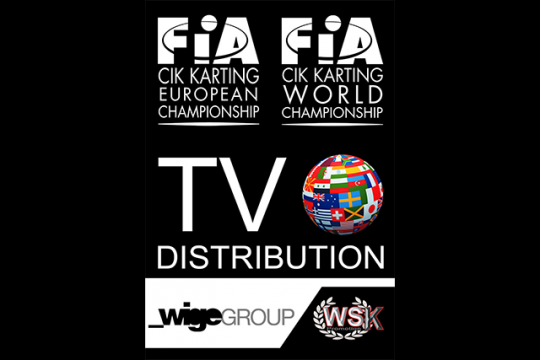 Press Release by: WSK
The agreement between WSK Promotion and Wige Group to broadcast the World and European CIK-FIA championships has been greatly appreciated: there are already 185 countries included in the distribution list of the 2016 events.

Maglie (Lecce, Italy) 27th July 2016
The CIK-FIA events on video worldwide.
After the agreement between Wige Group and WSK Promotion, for the broadcasting of the World and European CIK-FIA Championships, the German company has already achieved important goals, recorded in their periodical report. The broadcasting of the races -both live and pre-recorded - as well as the highlights of the events have immediately received a worldwide coverage. So far, in fact, 185 countries have been included in the distribution of the images produced by WSK Promotion, with 60 TV networks which have already confirmed their subscription to the Wige Group's programme for the airing of the formats dedicated to the events of the 2016 European Championship.
The figures of CIK-FIA's great events.
Karting has immediately had a very good start among the Motorsport events aired by Wige Group, events which include F.1, World Rally Championship besides the DTM Series and the European FIA F.3 Championship. The July report shows that in 132 countries there are 23 TV channels which air the pre-recorded broadcast of the races; 7 networks use, in 83 countries, the highlights, while the after race video magazine is aired by 53 broadcasters in 178 countries.
The map of the TV broadcasting.
The TV broadcasting programme of the CIK-FIA 2016 calendar includes 7 events: the 5 rounds of the European Championship and the 2 appointments of the World Championship. So far, among the countries included in the broadcast coverage, there are 43 European countries, 3 in North America, 51 in Central-South America, 29 in Asia, 18 in the Middle East, 53 in Africa, 10 in Oceania.
press@wskarting.com