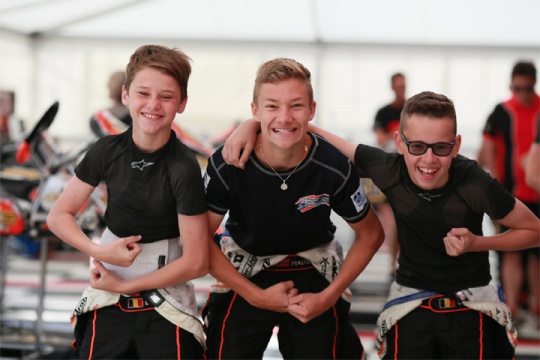 Press Release by: CRG Racing Team
The final round of the European KZ, KZ2, OK and OK Junior Championships is scheduled this coming weekend of July 31st in Genk (Belgium). CRG will field the whole works team in all the categories on track in this decisive round for in CIK-FIA European campaign.
The await is mounting ahead of the closing round of the European Championship scheduled in Genk (Belgium). CRG will line up its full works team as it is fighting for the titles of KZ, KZ2, OK and OK Junior. A total of 18 drivers will defend CRG colors in the works team, a figure that is increased to 38 considering the privateers racing on the Italian chassis.

CIK-FIA regulations keep a good lot of drivers in the fight for the titles, thanks to the three mandatory jokers: the worst result of heats, that of Prefinals and Finals. For this reason, it will be difficult to know the name of the winners before the very last race to be held in this forthcoming Belgian weekend.

Category KZ is at the third round of the season, after the first two races held in Essay and Zuera. CRG will field Paolo De Conto, fourth in the classification – 24 points shy of the leader, Flavio Camponeschi, fifth with a 30 points gap to the top and Simo Puhakka, ninth and 54 points adrift. A total of 52 points are still to be awarded, math offers therefore some quite good chances especially to De Conto and Camponeschi. The two Italian drivers will certainly do their best to get a prestigious result in the European Championship. 2015 World Champion Jorrit Pex will also be among the top drivers on track with CRG.

FEDERER AND PEX FIGTHING IN KZ2

The round of Genk is going to be the third of KZ2. This weekend follows in fact the first two appointments of Essay and Adria. CRG colors are shining on top of the European Championship, as Fabian Federer of SRP Racing Team and Stan Pex of CRG Holland, have scored an all-CRG podium in Adria, with Dylan Davies of CRG Keijzer Racing.

Thanks to the victory scored in Adria, Federer got the classification lead at 85 points, while Pex follows him three points shy. CRG works team for KZ2 will include Fabrizio Rosati, Fuma Horio and Felice Tiene.

The KZ2 classification is even more compact that KZ’s, as Federer and Pex are close with each other and Federer is currently having the edge with zero discards in the heats, if the Italian scores good points in Genk. Only the final race will name the title winner though.


JOYNER AND HILTBRAND FOR THE GRAND FINALE IN OK

Category OK will run its fourth round of the season in Genk after the appointments held in Zuera, Adria and Portimao. The British driver Tom Joyner (Zanardi) is currently leading the classification, after the victory in the most recent race in Portimao, while Pedro Hiltbrand (CRG) is third, thirteen points short of the leader but with a double win in Adria under his belt. Hiltbrand’s disadvantage is voided by the jokers due to the double DNF in Spain, and the two drivers of Tinini Group will have equal chances in Genk.

CRG will also field the quick Finn Paavo Tonteri and the German Hannes Janker, both very competitive and authors of a great season so far.

A LOT OF YOUNG PROMISING DRIVERS IN JUNIOR

Genk is going to be the fourth round of OK Junior too. The Norwegian Dennis Hauger has good chances for a strong result, as he is currently fifth in the classification but can aim to top positions of the charts after his recent great performances. Hauger still misses a victory in the European Championship to be completely satisfied, be he won the Prefinal in Adria and can aim to the big target in Genk.

CRG works team will line up a lot of very interesting and quick youngsters in Genk, starting from the British Teddy Wilson, the German Muth Esteban and his brother O’neill, the Canadian Antonio Serravalle, the French Pierre-Louis Chovet, and the Brazilian Gianluca Petecof. The Spanish Kilian Meyer, one of the main protagonists of Euro Rotax and X-30 Euro Series, will be at the debut in OK Junior.

Live Timing, TV Live Streaming and all results will be available on www.cikfia.com