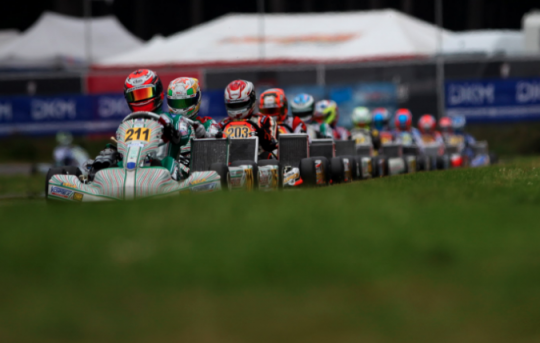 Press Release by: Tony Kart Racing Team
In the DKM race in Genk, the Tony Kart chassis have shone in all categories. Ardigò won in KZ2 at the culmination of a formidable comeback. In OK Junior category among the many top Tony Kart chassis, the success went to Vidales (KSM Schumacher Racing Team), but the leader of the championship is still our driver Milesi. In OK class Simmenauer, Racing Team’s driver, won a heat, moreover still a Tony Kart-Vortex has excelled in the qualifying, marking the pole position.
KZ2. On the occasion of the DKM competition held in Genk (Belgium) we received a brilliant success in KZ2 category with Marco Ardigò, able to impose in race-1 after a long run-up begun during the heats. The comeback of our Ardigò was forced due to a qualifying session where he had been sent in the rear.
Ardigò in fact achieved a positive sixth time in his session (Group-1), but the changing and unpredictable weather conditions, typical of this region, complicated the situation, making the asphalt much more faster than the second qualifying session (Group-2).
This abnormal condition has thus relegated many of the leaders, including our Ardigò, in the back of the grid.
Marcus Armstrong, who ran the qualifying in the Group-2 showed all his value as well as the technical qualities of the Racer 401, powered by Vortex, scoring the second fastest time.
The heats set everything in place and Ardigò was still able to make the most of the work done with the Racing Team staff, climbing up to the third row of the grid in race-1, next to the other Tony Kart-Vortex of Norris (Schumacher Racing Team). Marcus Armstrong completed the series of heats in ninth place.
In race-1 we completed the comeback in the best way, winning. Halfway through the race Ardigò took the lead of the race by placing between himself and the first of the pursuers, Abbasse, to a gap of a second.
In race-2 the previous performance was not repeatable, also on the basis of the new grid, with the first six positions of the grid reversed in race-1. So Ardigò started sixth, and performed a race always in close touch with the leaders, finishing fifth and earning good points for the DKM as well as valuable information for the next last round of the CIK-FIA European Championship.
Good scores and valuable experience was also made by Marcus Armstrong, who came tenth and never far from the top drivers.
DKM standings. KZ2 Genk

OKJ. Our chassis in OKJ are always at the top of the rankings and in qualifying, Blomqvist, driver of the WARD Racing signed the pole. In the heats the two Tony Kart-Vortex successes are marked Blomqvist and Shvetsov, both of WARD Racing. Our Milesi was always among the fastest and got the best lap in the heats B-C.
In race-1 Milesi finished with an excellent fourth place, after having fight for the podium with Piastri (FA Kart-Vortex, Ricky Flynn Motorsport) for the whole race.
In race-2 David Vidales took the lead after a few jokes and brought his Tony Kart-Vortex (KSM Schumacher Racing Team) to success.
Milesi enter the leading positions and is firmly leader of the championship, while Leonardo Marseglia, with the scores gained in Genk, confirms to be in the top ten.
DKM standings. OKJ Genk

OK. Even in OK category our Simmenauer, Novalak and Moggia, fought among the most strong rivals at the wheel of chassis of our production. Actually, leader of the qualifying was Smolyar (WARD Racing, Tony Kart-Vortex) and Simmenauer (best time group-1) got the fourth place overall.
Simmenauer then won the heats A-B closing the qualifying in second place, behind the Tony Kart-Vortex of Smolyar and ahead of Novalak.
In race-1 Novalak got very close to the podium, fourth, unable to launch the decisive attack on Tonteri.
In both races our Simmenauer and Novalak earned good points that place them at the top of the championshi. Simmenauer is third and Novalak fifth, when there are still two weekends (four races) at the end of the championship.
Guido Moggia who made his debut in OK, coming from OKJ, increased his performance steadily, reaching the twelfth place in race-2 and getting familiar with the new category’s material excellently, before the European round at the end of July.
DKM standings. OK Genk