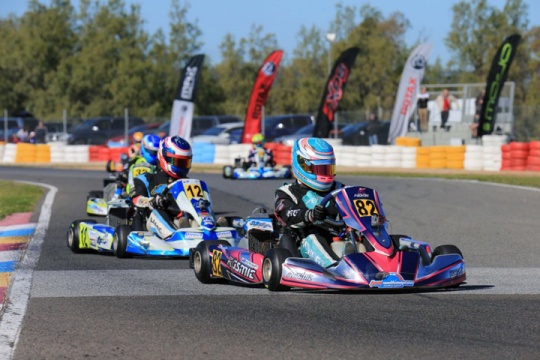 Joshua Car has broken through to claim his second round win in DD2 for the 2016 season with this weekend’s victory at South Australia’s Bolivar Kart raceway being marked with great significance as he was also awarded the Jason Richards Cup, in line with the Jason Richards Memorial event. Sunday’s finals were also headlined by two maiden Pro Tour round winners, Cameron Longmore in Junior Max and Joshua Davey in Rotax 125 Heavy, capping off a successful first visit for the series to the ‘city of churches’. Round 6 of the 2016 Rotax Pro Tour takes place on August 26-28 at the Hume International Raceway, Puckapunyal, Victoria and will be recognised as the 2016 Victorian Rotax State Championships.

Canberra’s Sebastian Ruiz followed on from the momentum gained from two heat race wins on Saturday to pick up the double in Micro Max on finals day, securing yet another round win. Ruiz’s closest challengers, Emerson Vincent and Harry Arnett battled across the two races with Vincent taking second in the pre-final ahead of Arnett before a last lap pass in the final earnt Arnett second with Vincent settling for third.

Following his victory in heat three on Saturday, James Wharton carried through his winning ways into both the pre-final and final in Mini Max, snaring the win in both of the weekend’s longer races ahead of team mate and series points rival, Kai Allen. Following a successful Saturday, Hugh Barter took third in the pre-final before slipping to tenth in the final, subsequently promoting Angus Giffin to join Wharton and Allen on the podium after starting seventh. New Zealand’s Connor Davison and Victorian Will Harper comprised the remaining places on the top five podium.

After securing a clean sweep across Saturday’s events, Travis Worton proved to be unstoppable in the weekend’s two longer races in Junior Max Trophy. Worton sprinted ahead to claim the chequered flag on both occasions, helping to extend his lead in the series with two rounds remaining. Jaiden Pope and Zayd Tones maintained their battle for the minor placings finishing second and third respectively in the final from Taylor Hazard in fourth with Taylah Agius taking fifth after sitting as high as second during the 24 lap race.

The theme of mixed race winners in Junior Max continued into both the pre-final and final as Victorian Dylan Hollis gradually continued his rise up the order to secure the victory in the first of Sunday’s two races. Hollis finished ahead of team mates Kyle Bonser, Cameron Longmore and Alec Morse with Nathan Herne and Kade Vink finishing fifth and sixth respectively, thus comprising the third row for the start of the final.

The first four would again be the standout performers from the outset of the 30 lap final, with multiple lead changes, Longmore eventually broke through to the lead, going on to take his first Pro Tour round win by 2.6 seconds. Cody Brewczynski delivered the ultimate recovery on the back of two heat race wins on Saturday, Brewczynski redcorded a DNF in heat three before finishing 12th in the pre-final, the Sydney driver drove through the field to pick up second. Morse, Hollis and Bonser would all make up the final placings on the podium.

With a win and two second place finishes in the heat races, Wollongong driver Cody Gillis was well and truly in strong form and a front row start in the pre-final in Rotax 125 Light proved to be a healthy boost from the outset to break through and claim the win in both of the longer races. Gillis would go on to finish 1.4 seconds ahead of team mate Joshua Fife in the final who picked up second behind Cody, helping to extend his lead in the series rankings.

Victorian Brad Jenner continued his climb back through the field as the weekend progressed by picking up a fourth and third in the two points scoring races, joining Gillis and Fife on the podium, finishing just ahead of South Australian Jonathon Mangos and Kody Garland who completed the top five overall in the final. A spin at the start of the final for Pierce Lehane after starting from third saw him fight back through the field to finish eighth by race end.

In just his second event in Rotax 125 Heavy, Queenslander Joshua Davey has come away with a round win, his first since being part of the Pro Tour. Davey’s win in heat three was the momentum booster required to return him to the front in both the pre-final and final as he took maximum points from the weekend. The minor placings behind Davey were mixed across the two races with Lane Moore securing second for the round ahead of Shay Mayes with Clem O’Mara and Benjamin Ritchie completing the podium.

The highlight of the Sunday races at Pro Tour Bolivar proved to be the DD2 final with Joshua Car breaking through to take the double victory, also adding his name to the Jason Richards Cup, making the victory that bit sweeter. Car made a move with two laps remaining in the final past Lee Mitchener who lead for much of the race with Mitchener having to settle for second behind the now two-time DD2 round winner. Adam Lindstrom was another who made a late race pass, improving his finishing position to third with Troy Woolston taking fourth and Queenslander James Foster stepping up to take his first Pro Tour podium for the season.

Despite a DNF in heat two, Victorian Lee Mitchener returned to his good form and winning ways in both the pre-final and final in DD2 Masters with the latter race being a comfortable victory for Mitchener by 2.9 seconds. Daniel Richert picked up second in the pre-final, though a DNF in the final promoted Queensland’s Kris Walton up the order to finish behind Mitchener and ahead of fellow statesman Troy Bretherton who took third after starting sixth. Scott Howard and Mark Flood would go on to secure the final two podium places in the 30 lap event.