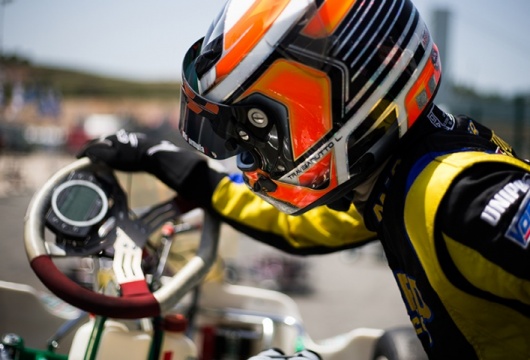 Press Release by: Vroomkart
During the third round of the DKM in Genk, we compared laptimes on the same track with laptimes done during the 2014 CIK-FIA European Championship. The difference is huge: is this due to new engines or just due to new tyres?

First of all if you want to know results of the third round of the DKM, here is the article.

New OK engines debutted this year, so we compared them with the KF category equipped with Dunlop tyres. In 2014 Lando Norris set a laptime of 53.549 seconds in qualifying, while this year Alex Smolyar stopped the chrono in 51.721 seconds. Both drivers were equipped with Vortex engines, so the gap is slightly less than 2”!

If we compare the KZ2, this year the fastest in qualifying was Alexander Schmitz (BirelArt/Vortex) lapping in 51.402 seconds with Vega tyres. Back to 2014, Arnaud Kozlinski (intrepid/TM) was the fastest in qualifiers with 52.861 seconds using Bridgestone tyres. Also in this category there’s a huge difference: 1.5 seconds.

In short, in only two years the evolution of karting reaches the maximum peak giving drivers very powerful karts. This huge gap depends on tyres or new engines? We know that OK engine (considered the better weight/power ratio) has a very important role in this improvement, while for the shifter category the major role is given by tyres.

In Genk for the last round of the CIK-FIA European Championship we’re gonna have some fun!