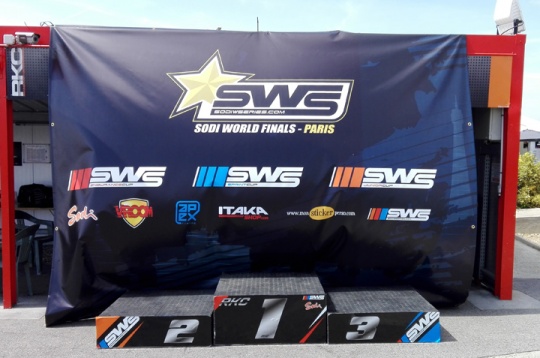 Press Release by: Sodi Kart
The 2016 world wide final for leisure karting that brought together the best drivers of the Sodi World Series was a resounding success. Organised by 3MK, the 7th edition of the Sodi World Finals saw high-level competition between over 270 participants, more international than ever during two days of intense racing in the Sprint Cup as well as the Endurance Cup and Junior Cup, ending in the evening with a river cruise in the heart of Paris.
In 2015, the Sodi World Series enabled 35,000 drivers to compete in over 3,000 races all over the world with 220 partner circuits, for the World Championship of reference in leisure karting. Launched in 2009 by Sodikart, the world No. 1 in karting, the concept has continued to grow on every continent, offering the opportunity to all recreational drivers to experience the sensations of karting competition extremely affordably. SWS gives them an international ranking and the chance to qualify for a major world final.

"We had a beautiful event!" said Bertrand Pignolet, director of Sodikart. "The international audience of the SWS flagship event increased further and leisure karting proved the great merit of its best representatives once again in rough sporting battles on the track. The final of the Sprint Cup was simply breathtaking, the Endurance Cup kept all its promises in a unique atmosphere and the Juniors showed amazing talent. I extend a big congratulations to the teams of 3MK Events and RKC who worked together closely with efficiency at all times. Thank you to all of the participants, and their numerous guests, for this great celebration of karting and I look forward to the 2017 edition!"

Both tracks, 1000 m and 1200 m, at RKC were not too much to accommodate more than 270 participants selected by SWS from 31 countries, an international representation that has increased with the addition of China to the competition, as well as the Philippines, Poland and Slovakia. To the great satisfaction of all, the race format was further enhanced with an extended running time - 2h 30 per driver in the Sprint and Junior Cups - and increased suspense during the semi-finals and finals. To ensure the greatest possible sporting fairness, the karts, weighted according to the weight of their drivers, were swapped for every race.

The beautiful weather that prevailed throughout the event in the Paris region created very competitive races from start to finish, with the winners celebrated at each of the 43 podiums of the event in front of a large audience. Media coverage of the 2016 Sodi World Finals was particularly comprehensive on social networks through live-timing provided by the official timekeeper Apex Timing, as well as a TV-quality live broadcast on the internet. The joint organisation by 3MK Events and RKC deserves praise for its near perfect professionalism.

Of the 77 drivers in the Sprint Cup at the wheel of their powerful Sodi RX 250, the Belgian Kevin Caprasse, already the winner in 2015, literally dominated his worthy opponents. After a clear round, Caprasse won the suspenseful final of the World Masters, where he was not the fastest, thanks to his experience acquired over time in SWS, opposite Simon Delvenne (BEL) and Julian Azzopardi (FRA) other sound competitors in the discipline.

Luff adds a new title in the Junior Cup

40 Juniors from 11 to 15 years of age competed this year on the specially designed Sodi LR5. The 2015 British champion Matthew Luff didn't have an easy time with formidable opponents like Alex Connor (ARE), the leader after the heats, Tom Delfosse (BEL) in the semi-finals or the top French drivers Mickaël Mota and Rémy Goville. Luff imposed in the World Masters Super Final despite resistance from the youngster Connor, fighting with Delfosse for the second step of the podium.

Endurance Cup: CG Pro Racing finally wins at the end of the night

Organized over night from midnight to noon, the big race of the Endurance Cup was contested by 37 teams on karts revealed at the last moment: the new Sodi SR5 with further improved quality, powered by the powerful 390cc engine. The event, always charged with a magical atmosphere with a "Le Mans" style start which was followed by fireworks, delivered its verdict in the final moments. After 639 laps of the 1200m track (over 750 km), the crew of CG Dubai Racing Pro won by less than a minute ahead of the Swiss Team Pro and Pastina & Friends Veneto Corsica, the 2015 winner.

The great leisure karting festival ended with an exceptional gala event on a riverboat in the heart of Paris. While the City of Light gradually appeared with the brilliance of its nocturnal illuminations, drivers and guests savoured the pleasure of participating in an unusual event together.

The winners of each category will long remember this 2016 event which was particularly well endowed as the crew of the Endurance Cup winner, CG Racing Pro, is being invited to participate in the 24 Hours of Le Mans Karting, the top test of endurance in world, to be held on 17th and 18th September. Matthew Luff, the winner of the 2016 Junior Cup, receives a complete set of Alpinestars racewear, identical to official drivers of the Sodi Racing Team, and a Bell helmet. Finally, the winner of the Sprint Cup, Kevin Caprasse, has been invited to spend two days in formal testing with the Sodi Racing Team, a VIP visit to Sodikart and then participate as a driver, in a day of testing alongside Anthony Abbasse and Bas Lammers, the Sodi factory drivers.

The success of the 2016 Sodi World Finals reinforces Sodikart's efforts to make competition karting accessible to as many people as possible across the world thanks to the Sodi World Series which is becoming increasingly popular on five continents. See you in 2017 for the 8th edition of this extraordinary event, with new surprises to boot.