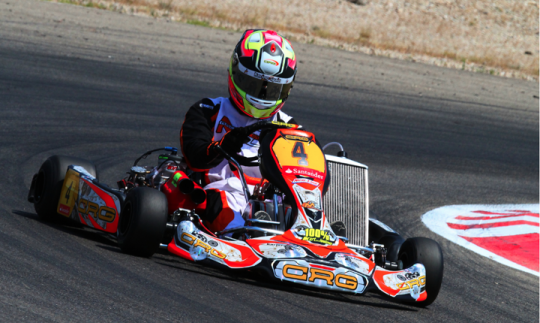 Press Release by: CRG Racing Team
Pedro Hiltbrand obtained in Zuera the third double win of the season in as many rounds of the KZ2 Spanish Championship and confirmed his classification lead.
Pedro Hiltbrand obtained another spectacular success in KZ2 on CRG-Maxter at the third round of the Spanish Championship held in Zuera during the weekend of July 10th.

Following the first two rounds of Recas and Portimao (Portugal), the CRG driver scored his third spectacular double win in KZ2 in Zuera, at the wheel of the CRG Road Rebel chassis pushed by a Maxter engine unit prepared by Kartissimo by Andreoli.

PEDRO HILTBRAND LEADING ON CRG-MAXTER IN ZUERA TOO

Thanks to this further double win, that adds to the ones scored in Recas and Portimao, Pedro Hiltbrand confirmed to be the absolute leader of the championship reaching level 270 points and enjoying a 54 points lead on his closest rivals.

The next round of the Spanish Championship will take place in Alcaniz next August 28th.

All results are available at www.cronosystem.es/cek2016/