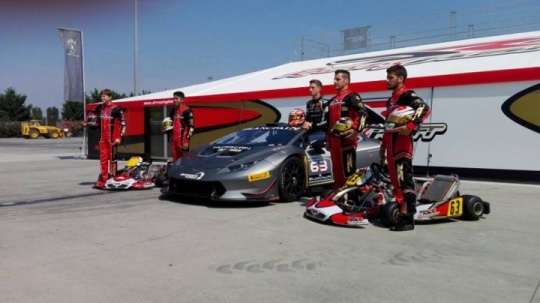 Author: Vroomkart International
An incredibly hot Adria hosted the first day of training for the Lamborghini Squadra Corse Kart Drivers Program.
The partnership between DR Kart and Lamborghini Squadra Corse has started: as announced the team directed by Danilo Rossi will be the point of reference for Lamborghini in karting, with the main aim to select and grow new professional GT drivers. Today was the first day of training for the DR Kart drivers: Mauro Simoni, Cristofer Zani, Muizz Musyaffa Abdul Gafar and Justas Jonusis.

"Nowadays young drivers see the GT as a real opportunity to become professonial drivers, and not as a second choice. - commented Lorenzo Facchinetti, Lamborghini external consultant for motorsport communication -  This programm want to develop and help young and talented karters to become Lamborghini factory drivers."

Then the action moved to karting track, where Mirko and the four karters tested until lunch. This was the first time for Mirko in a KZ kart, and he was surprised about the power and the handling of it. Despite the fact that it was his first time driving a KZ and on a unknown racetrack, Mirko's lap time was really good.

After the lunch for karters is the time to taste the Super Trofeo Huracan: Mirko Bortolotti drove the Huracan 620-2 LP Super Trofeo with DR drivers on the passenger seat, and they were amazed by the car.

The full report will be out in August on Vroom Magazine.