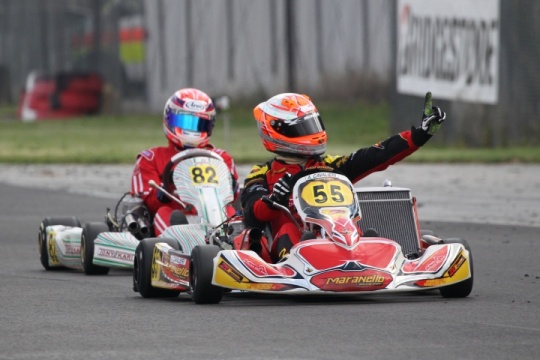 Press Release by: FM Press
The Summer Trophy of Lonato recorded 270 entered and 264 verified drivers, numbers that confirm the important figures scored in this season. The race has been valid for the Regional Lombardia Championship and for the Rok Cup North Area.
The South Garda Karting has successfully housed the 3rd Summer Trophy, the event that thanks to its 270 entered and 264 verified drivers, is continuing to record an excellent participation on the national karting scene and improved the figures of the circuit located in Lonato del Garda.

The third edition of the Summer Trophy has been characterized again by a perfect organization of the event and by highly spectacular races, both in the national categories and in the Rok Cup, the single branded championship that has the added value of being very competitive. A total of 165 drivers have been competing in the Rok Cup North Area, while 99 drivers have been enlived the races of the national categories of the Regional Lombardia Championship and of the new Challenge Italia North area.

KZ2. The most powerful category, KZ2, has seen a lot of drivers challenging each other for the final win, but the driver from Sondalo (Lombardy) Alberto Cavalieri, ended up on top in the final sprint to the line on Maranello-Modena. Giacomo Pollini, on Tony Kart-Tm, has been shining early on with the pole position, while the Austrian Christoph Hold on Maranello-Modena won the Prefinal, before taking the lead of the Final until an engine failure stopped his run. A good duel for the victory ended with the surprising Alberto Cavalieri having the best of Pollini at the end of a 15 laps chase, as Pollini had inherited the lead of the race from Hold. Cavalieri celebrated the win at the flag, pipping Pollini, while  Marco Zanchetta was third on Maranello-Tm after winning his battle with Nicola Gnudi, who was fourth on VRK-Tm. The fifth place went to Massimo Dante (Maranello-Tm), who recovered from the 13th place of the Prefinal.

PRODRIVER UNDER. The victory of Prodriver Under went to Emanuele Denti (Rossokorsa-TM), who led Rodolfo Massaro (Energy-Tm) and Gandolfo David (VRK-Tm). Matteo Salvetti on Parolin-Tm was fourth after posting the quickest time in qualifying and winning the Prefinal.

PRODRIVER OVER.  Andrea Tonoli dominated Prodriver Over on CRG-Tm. The driver from Brescia has been the quickest in qualifying and in Prefinal, but he had to wait more than ten laps into the Final to get the lead back as he had lost P1 early on in a not so great start. The second place went to Diego De Palma (Maranello-Tm), as Manuele Quintarelli (Righetti Ridolfi-Tm) was third.

125 CLUB. A good race was put in by Mauro Moretti (Tony Kart-Tm) in 125 Club. He managed to win both the Prefinal and Final after some hiccups in qualifying. Moretti recovered first claiming the win in the Prefinal, before keeping his momentum and taking the win of the Final too. The second place went to Davide Micheletti (Maranello-Tm) and the third to Enrico Pasotti (Parolin-Tm).

60 MINI. The victory of 60 Mini was taken by Paolo Franch (FA Kart-Tm) who topped the Austrian driver Kiano Blum (Maranello-Tm) and Giorgia Barbieri (FA-Tm). Mattia Vischi (Intrepid-Tm) had to settle for P4 in the Final after topping charts in qualifying and in the Prefinal.

ENTRY LEVEL. The smallest of categories, Entry Level saw the victory going to Roberto Castellozzi (Italcorse-Iame), as Giacomo Pedrini (Lenzo-Lke) and Patrik Fabroni (Tony Kart-Lke) joined him on the podium respectively in second and third. The fourth place went to Alessandro Antonelli (Top Kart-Lke) and the fifth to Nicolò Caserta (Tony Kart-Lke).

ROK MINI. Rok Mini has been the busiest category as it saw 52 drivers making it to the track. After heats, the victory of Final A went to Tymoteusz Kucharczyk (TB Kart-Vortex), who claimed the victory leading Federico Albanese (Righetti Ridolfi-Vortex) and Lorenzo Ressico (Birel-Vortex). Final B (reserved to the drivers not qualified for Final A) was won by Federico Desiderio (Birel-Vortex). The 9yrs old Brazilian “Emmo” Emerson Fittipaldi, son of two times F1 World Champion and two times winner of the Indianapolis 500 Emerson Fittipaldi, was also present in Rok Mini.  Emerson was sixth in Final B. Former F1 driver Jarno Trulli’s son, Enzo Trulli, has also been competing in this category. After posting the quickest time in qualifying, the young Trulli has been shining in the heats and closed his effort with the ninth place of Final A.

ROK SENIOR. Giorgio Molinari (Tony Kart-Vortex) has dominated Rok Senior winning the Prefinal and the Final, after claiming the pole position in qualifying. At the flag, Molinari pipped Lodovico Laurini and the Swiss Michael Muller, also on Tony Kart-Vortex.

ROK SUPER. The Rok Super scene was dominated by Andrea Moretti (Tony Kart-Vortex), who won Prefinal and Final, after his brother Marco posted the quickest time in qualifying. Andrea Moretti won the Final by a good margin on Vittorio Maria Russo and Riccardo Cinti, both onTony Kart-Vortex.

All results are available at www.southgardakarting.it.