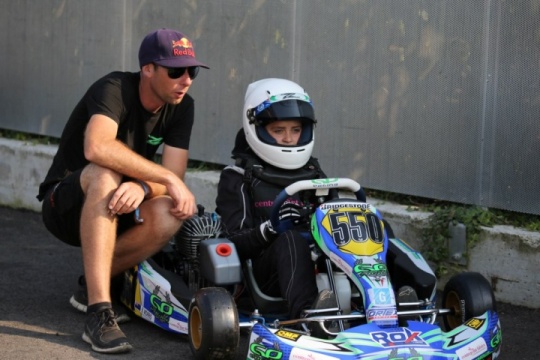 Press Release by: KartSport New Zealand
Stewart sisters impress at Aussie Kart Championship round, while Breanna Morris earns praise for effort in the ROK Cup Italy.
New Zealand karting's Stewart sisters, Ashleigh and Madeline from Wellington impressed in their Australian Kart Championships debut at Ipswich in Queensland over the weekend. Ashleigh, 17, ended up best of the four-strong Kiwi squad at the fourth (and penultimate) round of the 2016 series, with a 12th in the TaG125 class. In her first drive in a 6-speed gearbox- equipped KZ2 class kart, Madeline, 15, also did well, crossing the finish line 22nd in the Final.

Having run as high as sixth in the heats Ashleigh was actually quick enough for at least a top six place in the Final. However she ran off the track and had to work here way forward from the rear of the field in both the fourth heat (in which she ended up 16th) and the Final (12th).

"Overall, we’re really happy with our first Karting Australia Championships experience, " the girls' father Tony said on Sunday evening. "Ashleigh is a bit disappointed she could not convert her pace into results but Madeline is pretty happy with her first outing in KZ2. She certainly found it physically and mentally very hard but she managed to pull off a few good passes and improved every time she went out."

Young Kiwi kart champ Breanna Morris has earned praise for her efforts in making the A Final and finishing 23rd in the Vortex Mini ROK class at the big Trofeo D'Estate kart race meeting in Italy on Sunday.

The 12-year-old from Auckland's North Shore earned the right to contest the annual ROK Cup International Final meeting at the South Garda Karting circuit in northern Italy in October this year when she won the New Zealand Vortex Mini ROK class title at the Giltrap Group KartSport New Zealand National Sprint Championship in Hamilton at Easter.

Her trip to check out the track and competition at the Trofeo D'Estate meeting over the July 02-03 weekend was made at the suggestion of her GP Karts team boss here, Auckland-based international Daniel Bray.

With funding help from Auckland businesswoman Meegan Pollock of Centrepoint Fabrics and her husband, motor industry and motorsport entrepreneur Peter 'PJ' Johnston, as well as Wayne Green and Sebastian Jonsson of Auckland demolition specialist Green Way Ltd, Breanna was able to make the trip and drive for a GP Karts team.

The faith Bray and everyone else who helped make the recce trip possible was initially rewarded when, after testing at the track last week, Breanna qualified 16th in her group and 34th out of a field of 52.

She then worked her way forward in each of her heat races - to 18th in the first, 13th in the second and 16th in the third.

That earned her a spot in the A Final (for the top 36 drivers after the heats), starting from P34 on the grid and ending up 23rd after a hectic 12 laps.

"Our first goal was to make the A Final so that in itself is something Breanna can be very proud of," said Bray. "To then manage to go forward in that race, against the best drivers from Italy was something else again. She did a good job, a very, very good job."

Breanna summed it up best when she said; "I had a battle on my hands all race long. Even though I made up 11 positions I must have made at least 30 passes during the race. The racing was very hard, harder than I expected."