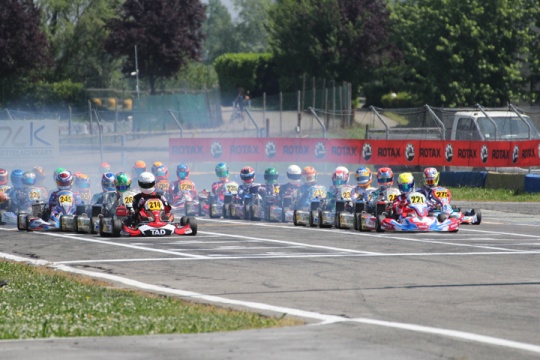 Press Release by: Rotax Euro Challenge
Halftime in the 2016 ROTAX MAX Euro Challenge: The Circuito Internacional de Zuera, situated in northern Spain right between the cities of Barcelona and Madrid, will host the third round of Europe's unique ROTAX racing series. From July 18th to 24th the summer race will mark the halftime of the season not only promising a hot competition on the tarmac but off the track, too.
The 1.700 metres long circuit features a quite untypical characteristic for karting: Highspeed is the keyword which describes the fastest and longest course of this years' calendar best. Slipstreaming is the passport to fame in Zuera: Besides speed, the drivers of the three well-stocked categories of junior, senior and DD2 have to show very tactical skills if they want to succeed in the end.

In the junior class everyone is chasing Axel Charpentier (Strawberry Racing). The Frenchman won three out of four races and leads the table. Dutchman Glenn van Berlo (Hugo Motorsport) follows in second place. After numerous podium positions he could be ready to take his virgin victory at last. Having gained his first season triumph already, Mark Kimber (Strawberry Racing) is another youngster who is aiming for the top. During the race in Italy the Brit celebrated his magic moment which boosted him into a favourite role for the upcoming competition.

When it comes to the senior category, Nicolas Schoell (Strawberry Racing) is the man to be beaten. The driver from Austria, who is only racing his first season in the seniors, almost gained the maximum points thus far. Only a second place in the prefinal at Castelletto troubles his walkover insignificantly. Anyhow Schoell's lead is quite comfortable which puts his teammate Gary Donnelly (Strawberry Racing) from Ireland and the reigning vice champion Rinus van Kalmthout (Daems Racing) from the Netherlands on the spot if they want to keep up their title chances in any way.

Lukasz Bartoszuk (CRG S.P.A.) is the driving force in the DD2 category. By his double success in Italy the Pole conquered the top of the championship table. Yet there are only two points separating him from his direct chaser Kevin Ludi (Spirit Racing). The Swiss, who had won the opening round in Belgium, was less lucky in Italy and wants to change tack in Spain. Zuera could be a watershed for Ferenc Kancsar as well. Despite a good speed the reigning champion from Hungary only looks back on few highlights till now. Currently in third place, he really has to turn the tide if he wants to defend the European crown in the end.

As for the special classification of the DD2 Masters, Martin Pierce (Uniq Racing Team) is in control. He won every single race of the season and is even classified on a remarkable eighth place in the overall ranking of he DD2 grid. Yet it's not over till the fat lady sings and so Irishman Richard Faulkner (Coles Racing) and Poland's Slawomir Muranski (Wyrzykowski Motorsport) should have a backlash up their sleeves.

The halftime race will be an exciting show and might lead to the first decisions in the championship. So it's a non-miss event, everybody is invited to join: RGMMC offers a full range with live streaming, live timing and social media coverage. More information regarding reports, photos, results and live TV stream are available on the official websites www.rotaxmaxeurochallenge.com or www.telemundi.com.