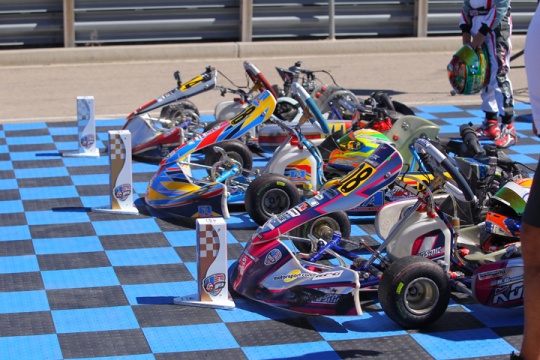 Press Release by: MAXSPEED GROUP INC.
Championship point leaders receive invites to the 2016 Rotax MAX Challenge Grand Finals.
Upon the conclusion of the second round of the 2016 Sofina Foods US Open Presented by Fikse Wheels series, seven Rotax MAX Challenge Grand Finals (RMCGF) tickets were awarded to championship point leaders. With temperatures high in Utah, so were the stakes as drivers hoped to leave the Utah Motorsports Campus not only as points leaders heading into the Las Vegas finale but also with a RMCGF ticket in hand.

In Rotax Micro MAX, Diego LaRoque started his weekend off third quick in qualifying. Perfect through the heat races with all four wins, the Arizona resident had to settle for second in the final. With enough points garnered from the weekend and his victory in NOLA, LaRoque earned his invite to the RMCGF.

Up and coming pilot Tyler Gonzalez has been the one to beat in 2016 US Open Rotax Mini MAX action. Dominating the weekend with all four heat race wins and the final victory by a five second margin, the reigning US Open Mini MAX champion solidified his name at the top of the points to join Team USA in Italy later this year.

After earning Team USA a Vice-Championship at the 2015 Rotax MAX Challenge Grand Finals in the Rotax Junior MAX category, Mathias Ramirez will be back in 2016. A last lap pass in the final put Ramirez second in the points, as current class leader Nick Brueckner already secured his ticket at the Challenge of the Americas.

In Rotax Senior MAX, two second place podium finishes in 2016 US Open action put Floridian Austin Garrison in contention for the coveted RMCGF ticket. Currently second in the point standings, Garrison will contest his second Grand Finals after competing on Team USA in 2014 in the Junior MAX category.

Billy Cleavelin will join Team USA in 2016 for the first time, as he tops the current Rotax MAX Masters point standings. Taking final wins in both NOLA and Utah, the Californian placed second overall in the 2015 US Open Masters MAX class claiming Vice-Champion status.

Nathan Mauel will return with Team USA to the RMCGF for the seventh time, this time in the Rotax DD2 MAX Masters class. Showing enough pace to run with the DD2 drivers in the combined class, Mauel tops the charts after taking victories in both US Open rounds in 2016.

The seventh RMCGF ticket was awarded to Canadian Jeff Kinglsey in the Rotax DD2 MAX class. Kingsley ran perfect all weekend, from qualifying through the heats and in the final to earn his trip to Italy this October. Team Canada will also grow by one, as Oliver Askew has informed MAXSpeed he has officially declined his DD2 ticket from the Florida Winter Tour, which will put the ticket in the hands of Canadian Marco Signoretti.

The 2016 Rotax MAX Challenge Grand Finals will take place October 16-21 at the Circuito Internazionale di Napoli in Sarno, Italy. Team USA will be vying for Grand Finals championships as well as their third Nations Cup title, after earning the honor in 2015 and 2013.

The 2016 Sofina Foods US Open series will conclude in high style in Las Vegas, Nevada at the Rio All Suite Hotel and Casino November 1-5.