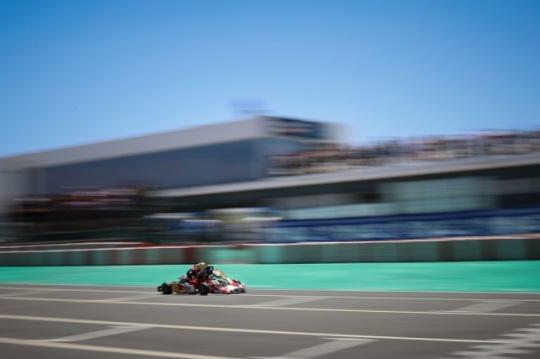 Press Release by: DR Racing Kart
DR Racing and "Muizz" impressed in Portimao.
DR Racing, the official team for DR Racing Kart, has made an outstanding impression in the OKJ category in Portimao, Portugal! This past weekend held claim to round three of four in the 2016 CIK-FIA European Championship and team driver Muizzuddin Musyaffa Abdul Gafar, simply known as “Muizz”, put in a full weekend of top performances. The team, along with Muizz, have shown great pace at times this season, but top-tier results have escaped them -- until now, adding a podium finish to their season accomplishments after finishing third in a 72 kart field.

Muizz had his DR Kart on pace right away in Portugal, qualifying second -- a mere 0.035" from taking the pole position. The Malaysian would go on to lead laps in the heat races, recording results of 2-5-2-2 on Saturday, putting him third place on the grid for his pre-final on Sunday. As the final day rolled through, Muizz would tally a second place in his Pre-Final and ultimately third in the 17-lap final, giving the first year team member all top five results through the weekend, a feat only few achieved. With the result, the 14-year-old has improved in each round and now sits in sixth place for the championship.

Joining Muizz with the factory operation this weekend were team drivers Martin Oscar Jose Herencia from Spain and Justas Jonusis from Lithuania. The latter, Jonusis, had similar pace to Muizz through free practice, but did not reach his maximum abilities in qualifying. The untimely result put him behind in the heats, however he still managed to score three top fifteen results that set him up for a shot at the final. Despite the good early pace and satisfactory heat results, a very early exit in the pre-final kept the Lithuanian from reaching the final. Herencia too had problems in the pre-final, keeping him from finishing, and continues to improve his abilities on the sport’s biggest stage in Europe.

DR Racing will now look forward to capping off the European Championships over the July 31st weekend for the fourth and final round when all four international categories come together in Genk, Belgium.