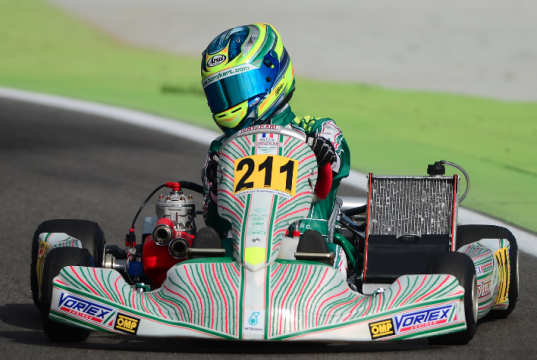 The third European Championship’s act for OK and OKJ categories is going to be runs in the picturesque Portuguese Portimao track. After the two rounds of Zuera (Spain) and Adria (Italy), in Portugal we will have at the top of both categories drivers at the wheel of technical material of our production. OK leader is Karol Basz of the Kosmic Kart Racing Department and first place in OKJ is Noah Watt of the Baby Race team.

In the cadet class we will have David Vidales who is fighting for the title, taking the fifth position after the Italian victory.

Our other drivers will be Leonardo Marseglia, Guido Moggia and Jack Doohan, all young drivers who are growing with every race and can perform very well.
In OK class, next to Clément Novalak and Jean Baptiste Simmenauer there will be, in this occasion, also Marcus Armstrong, driver usually engaged in KZ class with our Racing Team but who will go back in the category with no gear on this competition only.

All our drivers will have at their disposition the most appreciated technical equipment in the karting scenario, the Racer 401 chassis (http://www.tonykart.com/telai.php) powered by Vortex DDS and DDJ engines, supported by the impeccable staff of the Racing Team.

The appointment of Portimao is the third of four rounds scheduled for the European Championship of the two categories, OK and OKJ. The final round will take place on the Belgian track of Genk at the end of July.

To watch the Sunday finals link at: http://www.cikfia.tv/live-tv.html

Rankings are available on the official CIK-FIA website: http://www.cikfia.com/competitions/cik-calendar/2016/portimao/ok/championship-standings.html