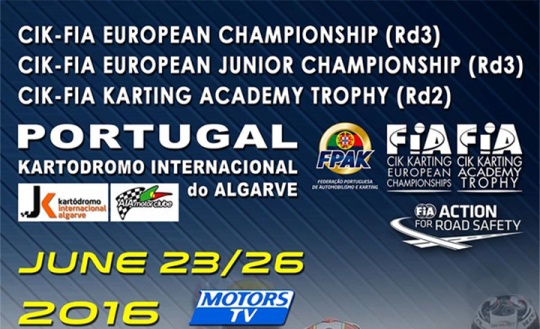 Press Release by: FIA Karting
The Competition scheduled from 23th to 26th June 2016 in Portugal, near Portimão, will be the penultimate step towards the conquest of the titles for the three categories concerned, OK, OK-Junior and Academy. At this point, nothing is settled, the best still have the opportunity to consolidate their positions or to catch up, as appropriate.
Located within the Portimão automotive complex, the Kartódromo Interncional do Algarve was the scene of hotly contested races as well as a disruption in the rankings last year for its first appearance on the CIK-FIA calendar. Its 1531 metre long track, full of elevation changes, proves to be both technical and selective due to its balanced alternation between fast sectors and twisty parts. Little used in competition, its surface offers new conditions for the teams. 171 Drivers, including nine "Wild Cards", representing 49 countries, are expected in Portugal. France is the first in the ranking of nations with 17 drivers, ahead of Spain (13) and Russia (11).

This one-make Competition aimed at revealing young talents from around the world this year uses new equipment provided by the OTK Kart Group. The 51 drivers from 39 nations are using Exprit chassis with a Vortex OK-Junior type engine, and Vega tyres. During the first of the three Competitions on the circuit of Essay (FRA), the Briton Callum Bradshaw asserted his claims vigorously against the Dane Mads Eielso Hansen and the Frenchman Thomas Mialane. The Briton Oliver Clarke and the American Jagger Jones also showed brilliant form. The Trophy will end in September as part of the CIK-FIA World KZ Championship organised at Kristianstad (SWE).

As usual, it will be possible to follow the final day of the round on 26th June on cikfiachampionship.com and cikfia.tv. The streaming will start at 10:30am with the drivers’ parade, then the Pre-finals and the Finals of the three categories. Don’t miss, the following week, the special report with the highlights of the event on Motors TV.