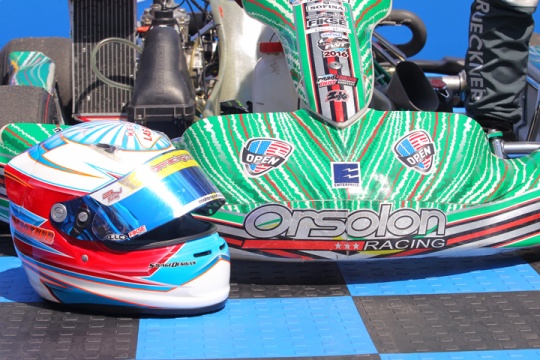 Press Release by: MAXSPEED GROUP INC.
Championship point leaders to receive 2016 RMCGF invitations.
Continuing their sophomore season of promoting the Sofina Foods US Open Presented by Fikse Wheels, MAXSpeed Entertainment is ready for the second round of the 2016 series. Taking place June 23-26 at the picturesque Utah Motorsports Campus (formerly Miller Motorsports Park) in Tooele, Utah just outside Salt Lake City, Rotax & Shifter pilots will reconvene for the midpoint of the 2016 US Open series. At the end of the weekend, championship point leaders in all seven Rotax classes will receive invites to the spectacular Rotax MAX Challenge Grand Finals, which will be held in Italy later this fall.

In Rolison Performance Group sponsored Rotax Senior MAX, standout driver Oliver Askew leads the points after a commanding performance in New Orleans. Already claiming a RMCGF ticket in the DD2 MAX category from the Florida Winter Tour, and entering the Utah round as the Senior MAX point leader, the US Open ticket could very well be passed on to the second place in points. With several drivers within in the top-five in points focusing their efforts on cars, the fight for the ticket could come down to Austin Garrison, who recently made the switch to J3/COMPKART, and British Columbia’s Kellen Ritter, who currently sit third and fourth in points repectively.

Nick Brueckner enters the second round the leader in Koene USA Rotax Junior MAX, however the young gun already secured his ticket through his 2016 Rotax Challenge of the Americas championship.  Sitting 55 points ahead of Australian Reece Cohen and Manuel Sulaiman, who are currently tied for second, Canadians Matthew Latifi and Ryan MacDermid will also be ones to watch in Utah, with both having standout performances to date in the Junior ranks. With extra points on the line for round two, and a slew of talent registered, it really could be anyone’s day come Sunday in Utah.

William Cleavelin and Scott Roberts will be duking it out at Utah Motorsports Campus in the Falcone GP sponsored Rotax MAX Masters category. Both have 235 points to their credit, with five-time Team USA pilot Derek Wang hot on their heels.

OGP’s Tyler Gonzalez will look to continue his winning ways in Utah to claim the RMCGF invite in the PSL Karting sponsored Rotax Mini MAX class, but will need to hold off the likes of Jak Crawford and Arias Deukmedjian, among others. Both classes are known for show stopping racing, and Utah will certainly be no different, especially with Grand Finals tickets on the line for the first time.

In the shifter categories, Kyle Kirkwood will make the switch to the Energy Kart USA Shifter Senior division after his mid-season switch to Team PSL Karting. Another high-profile shifter pilot will add his name to the mix in Utah, as Troy Diede will make his debut in US Open action.

Drivers will take to the 19-turn, 0.89-mile track for official action starting Friday, June 24 with qualifying and heat one. Saturday will feature the three remaining heats, with finals set for Sunday in Utah. Full schedule is available at http://bit.ly/1Yqa3NH.