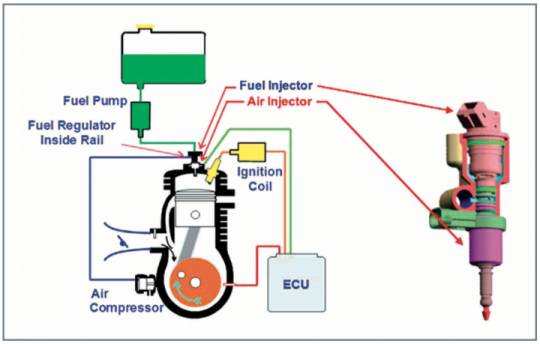 Author: Vroomkart International
Some general considerations, especially on future possibilities for the two-stroke engine seeing that karting is remaining its last bastion.
IS THERE A FUTURE FOR THE TWO-STROKE?

Today during one of my rare coffee breaks, after the usual “man talk” we ended up talking about the solutions used in the past, going back to the early nineteen hundreds, and such solutions were sometimes even uncomplicated, but in some cases they had just been thought up at the wrong time in history. Often, in fact, technology wasn’t ready to develop some ideas brought up by clever designers. In the end it wasn’t just rhetorical saying that, in most cases, someone had already thought of certain things before we did. At least, in the field of motorsport this has proved to be the case, and we have to accept it. However, after having heard things like “in twenty years time we will probably have to change jobs because everything will be electric”, I came out with, just for a laugh: «Well, probably in ten years time we’ll go back to the two-stroke». As everyone knows, I am a fan of the two-stroke and will be to my dying day, they were my first love, if not I wouldn’t be writing this page, and to be honest I still think that there is a chance and not a remote one either. Everyone can see that nowadays they are, unfortunately, relegated, to only a few sporadic events, not even top ones, even if the level is good, I have nothing against engine tuners, drivers and kart drivers in general, but out of the championships “that count”, the ones that make real money, the 2-stroke have been out for over a decade (MotoGP), in others they haven’t ever even entered and maybe simple due to regulations (Formula 1). True, you have to start from the bottom, but nowadays the 2-stroke needs a net change and this is only possible where there are resources, lots of recourses, in terms of people, know how and money to invest. It’s no longer the time where an individual who has genius and creativity can actually change things. I think it is an improbable situation, let’s say, with the degree of specialisation required today. Probably most of you don’t know, and certainly quite a while ago, an Australian firm, Orbital, made a direct injection helped by air, to make up for the brief mixing period, which seemed to work quite well; and not by chance that patent for two-stroke applications, as far as I know, was bought by several important car and motorcycle manufacturing set ups. Always from what I’ve heard, some factories, important ones, already had some small fleets of vehicles powered by 2 stroke injection engines. That period was the same one when diesel started to seriously pick up also out of heavy transport thanks to that simple idea, but at the same time very crafty, it was the very well known common rail. A project that I’d like to underline, has Italian origin, seeing that it was invented inside the Fiat Research Centre. Then everything was sold to Bosch who had the means and the resources to make it work (and on which, in the end, they have made real money from this). The thing is that many factories are at a crossroad: diesel or two-stroke? Without a shadow of a doubt, the first seemed an investment that was less hazardous and I’d say it’s evident which one top managers have opted for. They have done nothing but decided on the direction obviously towards which the market tended for. The great risk of betting on the 2-stroke could have already been itself the prejudice of people who have the idea that it is an engine that consumes, pollutes and spits oil; in fact the idea itself isn’t really wrong, but from what we have seen today, well... And this is the exact point I wanted to get to: who says that I have to do things like they have always been done using transfer and exhaust ports, lubrication loss and other things?