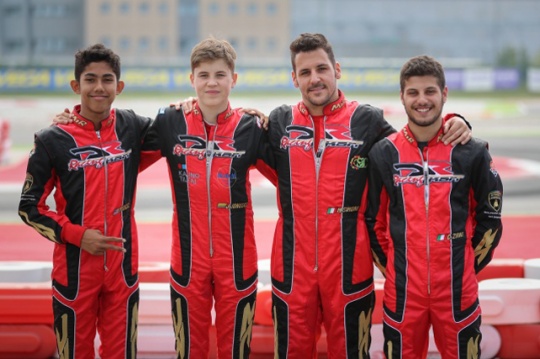 Press Release by: DR Racing Kart
After a promising but difficult start of the season the DR Racing Kart team headed back to Adria to continue their battle in the CIK European Championship.
This weekend both KZ2 and OK Junior were competing, which meant it was an all out team effort. From the start of the weekend the team was showing strong pace from multiple drivers throughout free practice. Heading into qualifying the team was confident and Muizz delivered on this with an impressive second place qualifying effort in OK Junior. His teammate Justas Jonusis qualified 30th, which was not optimal, but gave a lot of room to move forward. Throughout the heats both drivers were at the front with Muizz even winning one, but both drivers also had one bad heat, which put them 13th and 30th in the intermediate classification.

In prefinal 1 Muizz charged up from his 7th place starting position setting very quick lap times and was able to finish in 3rd. In prefinal 2 Justas was only able to move up two positions, but turning laps as fast or faster than the leaders gave him confidence for the final. As soon as the final started the drivers were faced with some quite difficult conditions racing in the rain on slicks. Both drivers were up for the challenge and after being hit early in the race Muizz battled back to a strong 7th place finish. Justas continued his move forward finishing in the 16th position.

For the more experienced KZ2 drivers Cristopher Zani and Mauro Simoni it was not as great of a start to the weekend. Both drivers did not qualify as well as the pace they showed in practice. Other than a flat tire in one heat for Simoni both drivers moved up throughout the heats and the prefinals this trend continued. In prefinal one Cristopher moved up to a 10th place finish while turning the second fastest lap of the race. In prefinal two Mauro also moved into the final with an 11th place finish. In a race that was eventually concluded by a red flag in heavy rain conditions, Mauro saw the finish in 16th position while Cristopher unfortunately couldn't show his speed as he retired early with a technical problem.

Next up for the team is the continuation of the CIK European Championship in Portimao, Portugal in two weeks time.