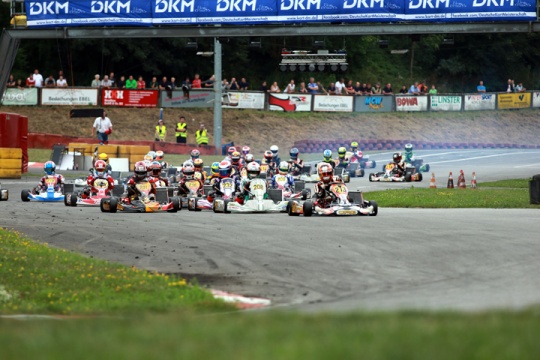 Press Release by: DKM
After a five-week break the German Kart Championship is going to continue next weekend. The ranked races three and four are going to take place on the Schweppermannring in Ampfing. The four announced classes are filled up with 150 drivers.
The season kick-off at the Prokart Raceland Wackersdorf already was a huge success. More than 50.000 spectators followed the races via video-live-stream and broke all records. At the second event in Ampfing, Paavo Tonteri (DKM), Charles Milesi (DJKM), Jorrit Pex (DSKM) and Max Tubben (DSKC) are going to start as the leading drivers of the championships.

The 1.063m long track in East Bavaria holds a couple of key spots. “In Ampfing, the infield and the chicane are especially important. If you catch the right path there, you can win a couple of tenths of seconds”, the reigning German Shifterkart Champion Alexander Schmitz (KSW BirelART Austria) knows.

The DKM (OK) keeps following the motto “less quantity, more quality” in Ampfing too. With 19 drivers the class is not completely filled up, but still promises a lot of excitement. Finn Paavo Tonteri (TB CRG Racing Team) impressed at the kick-off in Wackersdorf and is travelling to Ampfing as the leading driver after a race victory. Very close to him is reigning Kart World Champion Karol Basz (Kosmic Racing Departement). The Pole won the second race at the Prokart Raceland and is only slightly behind. Best German is currently David Brinkmann from the KSM Schumacher Racing Team.

The DJKM (OK Junior) is filled to the last place. 51 youngsters are going to start in Ampfing and are going to give it their all to catch up with the current leading driver Charles Milesi (Tony Kart Racing Team). The Frenchman received the maximum points and was really content after Wackersdorf: “This weekend went really well for us. The DJKM is a great championship and I’m really looking forward to the further course of the season.” Milesi’s first pursuer is Czech Petr Patcek (Formula K Racing Team), but he can’t only concentrate on the leading driver. Strong energy follows behind: among the hunters is German Luka Wankmüller (Solgat Motorsport), who is only five points behind second driver Patcek on fifth place.

Last year, the DSKM (KZ2)-victory series of Jorrit Pex (CRG Holland) came to a stop. Now, the Dutchman came back impressively in Wackersdorf and is leading the interim standings. The field is as highly manned as never before this year though. Next to Pex, who won the Shifterkart World Championship in 2015, top drivers such as Davide Fore (Gold Kart Racing Team) and Marco Ardigo (Tony Kart Racing Team) are also going to start. The three of them share eight World Championship titles all in all. Best German driver after the kick-off is Daniel Stell (SRP Racing Team) on fifth championship position. Reigning champion Alexander Schmitz achieved a bad start. The driver from the Lower Rhine Area switched his team during the past weeks though and is starting with BirelART-Kart for the first time in Ampfing.

The DMSB Shifterkart Cup celebrated its successful premiere in Wackersdorf. With this championship, the DMSB is presenting a fourth class within the framework of the DKM this year. The cup is an addition to the German Shifterkart Championship and is supposed to be the “second league” of German shifterkart racing. Rookie Max Tubben (CRG Holland) won the kick-off and is starting as the leading driver at the second event. Behind him with seven points less is Austrian Christopher Hold (Maranello Kart). Maximilian Paul is going to start for the team NKS for Racing as third driver and best German.

The drivers are already going to start with the free trainings on Friday (June 10th). Things are going to get serious on Saturday (June 11th) with qualifying and the following heats then. The 34 best drivers are going to compete in the finals on Sunday (June 12th) respectively then. Everyone who can’t be on location won’t have to fear missing something. More than 16 hours of live images are going to bring the German Kart Championship into your homes.